Q1 Earnings Season Off to a Solid Start

Note: The following is an excerpt from this week’s Earnings Trends report. You can access the full report that contains detailed historical actuals and estimates for the current and following periods, please click here>>>

Here is a quick rundown of the key points

•    The earnings and revenue growth pace for these 57 index members is tracking notably above what we saw from the same group of companies in other recent periods.

•    The proportion of these 57 companies beating EPS and revenue estimates is tracking above the performance of these companies in the preceding quarter, but remains roughly in-line with historical periods.

•    For the Finance sector, we now have Q1 results from 41% of the sector’s total market cap in the S&P 500 index. Total earnings for these Finance companies are up +26.8% from the same period last year on +8.5% higher revenues, with 76.5% beating EPS estimates and 52.9% beating revenue estimates.

•    For Q1 as a whole, combining the actual results from the 57 S&P 500 members that have reported with estimates from the still-to-come 443 companies, total earnings are expected to be up +8.6% on +6.2% higher revenues, with Finance, Technology, and Basic Materials expected to come out with double-digit earnings growth.

•    We are now into the heart of the Q1 earnings season; we will have crossed the halfway mark by the end of next week.

The major indexes have struggled since the March 1st peak and the trend has continued since the Q1 earnings season ramped up late last week. The current tentative market mood notwithstanding, the picture emerging from the Q1 earnings season is one of accelerating growth, with earnings and revenue growth for the period tracking above what we have been seeing in other recent periods.

The big banks have a relatively heavier weightage in the Q1 results at this stage and they all showed the hard-to-explain deceleration in loan demand that we had seen in the Fed data already. The loan questions notwithstanding, bank industry results have been very strong, with softness in the loan portfolios getting offset by strength in trading and advisory businesses and improved margins as a result of higher interest rates.

The Goldman Sachs (GS) disappointment has been surprising, but most likely a reflection of company-specific issues as it runs counter to what we saw from all of its Wall Street  peers. Goldman’s shortfall came in the one area where it has a well-earned reputation for excellence and leadership – trading in fixed income, currencies and commodities (FICC). The company’s FICC revenue was essentially flat from the year-earlier level, which compares to gains of +17% for JPMorgan (JPM), +29% at Bank of America (BAC) and +17% at Citigroup (C). Even Morgan Stanley (MS - Free Report) , traditionally considered not a big player in the FICC area, did better than Goldman Sachs.

We will see how the regional banks and insurers report results in the coming days, but the sector results that we have seen already represent a notable improvement over other recent reporting periods. The recent weakness in bank stocks is not a function how the group’s Q1 results have turned out, but uncertainty about earnings power in the current and following quarters as a result of the persistent downtrend in benchmark treasury yields since mid-March.

We now have Q1 results from 57 S&P 500 members that combined account for 16.2% of the index’s total market capitalization. Total earnings for these 57 index members are up +18.7% from the same period last year on +6.4% higher revenues, with 75.4% beating EPS estimates and 54.4% coming ahead of top-line expectations. The proportion of companies beating both EPS and revenue estimates is currently 45.6%.

The side-by-side charts below compare the growth rates and beat ratios for the 57 index members with what we saw from the same companies in other recent periods.

The comparison charts above show that while growth is unequivocally tracking above historical periods, positive surprises are doing better than the preceding period, but are roughly in-line with historical periods.

Q1 Expectations As a Whole

Looking at Q1 as a whole, combining the actual results from the 57 S&P 500 members that have reported already with estimates for the still-to-come 443 companies, total earnings are expected to be up +8.6% from the same period last year on +6.2% higher revenues. The Q1 growth pace has been steadily improving in recent days as companies, particularly banks, have been coming out with better than expected year-over-year growth.

This would follow the +7.4% growth in 2016 Q4 earnings on +4.8% higher revenues, the best growth pace of the index in almost two years. With Q1 earnings growth already tracking above the preceding quarter’s pace, which itself was a big improvement over the quarter before that (2016 Q3). The bottom line is that Q1 results represent an acceleration in earnings growth, which current consensus estimates project to continue in the coming periods as well, as the chart below shows. 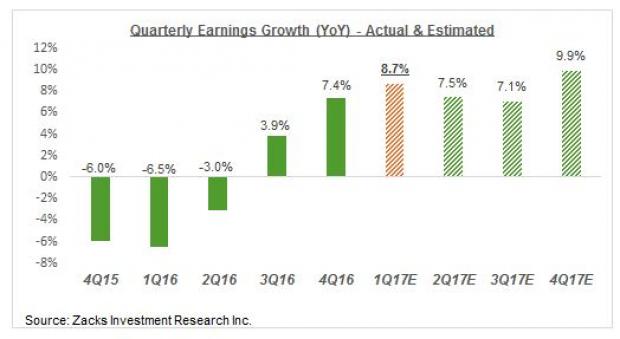 Please note that we have yet to see any ‘Trump bump’ in estimates to reflect the heightened post-election expectations. Stocks moved ahead of actual legislative changes, but the analysts will raise their estimates only after Congress passes tax and other reforms. Estimates have moved up for the Finance sector, but that’s primarily a function of higher interest rates since November 8th.