Bear of the Day: Walmart (WMT)

Walmart (WMT - Free Report) stock has fallen 15% in the last three months as Wall Street starts to price-in how difficult it will be to keep pace with the retailer’s stellar, coronavirus-driven growth. Walmart also missed our fourth quarter FY21 earnings estimates in February.

WMT now has multiple delivery and pick up options and its digital platforms are more robust. The company in September launched its subscription service to help it challenge Amazon Prime.

The historic retailer has aslo partnered with secondhand e-commerce clothing firm ThredUp, as well as Shopify (SHOP - Free Report) to bring more small businesses to its own third-party marketplace. And Walmart has bolstered its digital ad unit.

These efforts helped Walmart thrive during the pandemic. For instance, the company’s full-year revenue jumped roughly 7% to mark its strongest top-line expansion since 2009.

WMT’s fourth quarter sales growth was also impressive. Yet it still missed our adjusted earnings estimate by 8%. And its near-term outlook is a bit rough, as it goes up against a difficult-to-compete-against year.

Zacks estimates call for its revenue to slip by roughly 2% in the first quarter and 2% for the year. Meanwhile, its adjusted FY22 earnings are projected to come in flat. The nearby chart shows that analysts have lowered their overall earnings outlooks since its fourth quarter report. 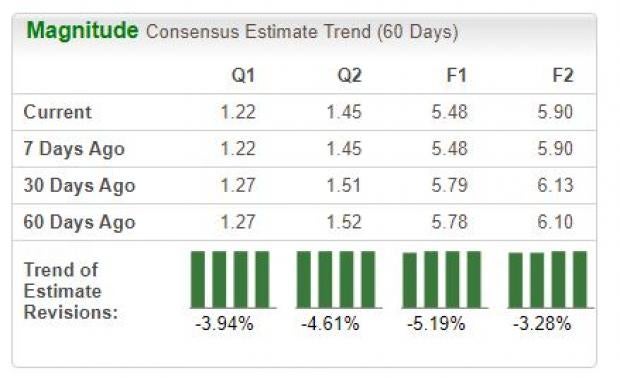 Walmart’s recent downward earnings revisions help it land a Zacks Rank #5 (Strong Sell) at the moment. The stock fell another 2% during regular trading on Wednesday, which puts it about 15% off its early December 2020 records.

All that said, Walmart stock is still a viable long-term play and its recent downturn has made its dividend yield look juicier, at 1.7%. But given its hard-to-compare outlook in the near-term and the market’s recent treatment of WMT, it might be best to stay away for now.

Bear Of The Day: Autodesk (ADSK)