Conventional wisdom tells us that the tax cuts will not only add to the economy’s growth trajectory but also be a boon for corporate earnings. Conventional wisdom would be correct in this respect, but we will have to jump through a few hurdles before we reach the ‘promised land’ and those hurdles will start showing up as soon as the big banks start Q4 results on January 12th.

The hurdles I am referring to are the one-time accounting charges that many banks and other companies will have to take in their Q4 earnings reports as a result of the tax law changes. Two areas are particularly notable here – the value of deferred tax assets (DTA) and lowered tax on the ‘deemed’ repatriation of foreign earnings. The deferred tax asset issue, which primarily pertains to prior losses that these companies can use to defray future tax liabilities, will be notable for the major banks.

Most of the major banks incurred big losses during the financial crisis and those losses found a place on the banks’ balance sheets as assets. But the value of these DTAs need now to be lowered given the new 21% corporate tax rate. These DTA adjustments will likely eat up the banks’ entire officially reported accounting earnings.

What Are Banks Expected to Report in Q4?

Bank earnings failed to impress in the Q3 earnings season and all of the factors that weighed on Q3 results remained in place in Q4 as well, keeping expectations in check. Net interest margin benefited from the Fed rate hike, but that incremental gain likely got offset by persistent deceleration in loan growth and soft trading revenues. On top of all of this are aforementioned charges that will likely muddy the waters. Our focus will be on recurring earnings, meaning that we will be excluding all of these charges from our adjusted earnings, but the impact of lowered tax rates makes comparisons to prior periods problematic. The issue is very pronounced for the banks, but will otherwise be a recurring issue this earnings season.

Total Q4 earnings for the Zacks Major Banks industry are expected to be down -6% from the same period last year on +5.3% higher revenues. This would follow +6.5% earnings growth in Q3 for the industry and +10% growth in 2017 Q2. JP Morgan (JPM - Free Report) and Wells Fargo (WFC - Free Report) , on deck to release Q3 results on Friday, are expected to report -12.9% and -9.2% lower earnings from the year-earlier level, respectively.

The table below shows the sector’s Q4 earnings growth expectations at the medium-industry level contrasted with estimates for the following four quarters and actual results for the preceding three periods.

Please note that the Major Banks industry, of which JPMorgan, Citigroup and others are part, accounts for roughly 45% of the sector’s total earnings (insurance is the second biggest earnings contributor, accounting for about 25% of the total). The insurance industry has been hard hit by this year’s very active and impactful hurricane season, with estimates for insurers taking a bit hit since the quarter got underway.

For the Finance sector as a whole, total Q4 earnings are expected to be up +3.1% from the same period last year, which would follow -7% decline in the sector’s earnings due to weakness in the insurance industry as a result of the Gulf Coast hurricanes.

Estimates for Q4 have held very favorably since the quarter got underway, as the revisions chart below shows. 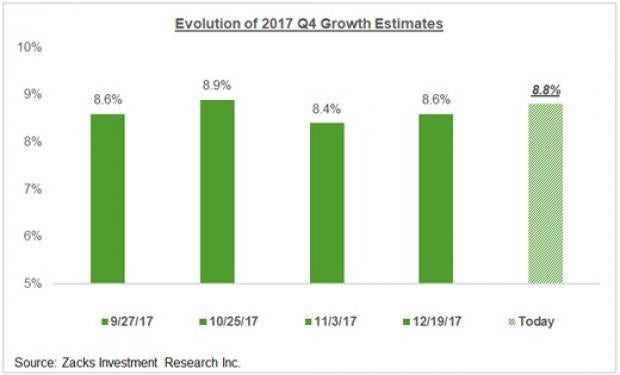 This revisions trend is the most notable positive development on the estimate revisions front in recent years. Q4 estimates for 11 of the 16 Zacks sectors have come down since the start of the quarter, with estimates for the remaining 5 sectors going up. The strongest gains have been in the Energy, Industrial Products, Basic Materials and Technology sectors. 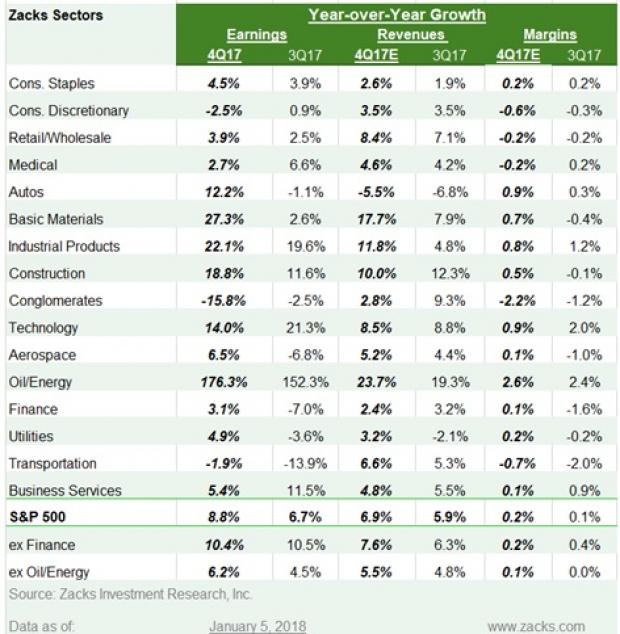 In terms of sector focus, the strongest growth in Q4 is coming from the Energy sector which benefits from easy comparisons. Excluding the Energy sector, the aggregate growth pace drops to +6.2% from +8.8%. Three of the 16 Zacks sectors are expected to have lower earnings in Q4 relative to the same period last year, with the Conglomerates sector as the weakest of them all (-15.8% lower earnings). 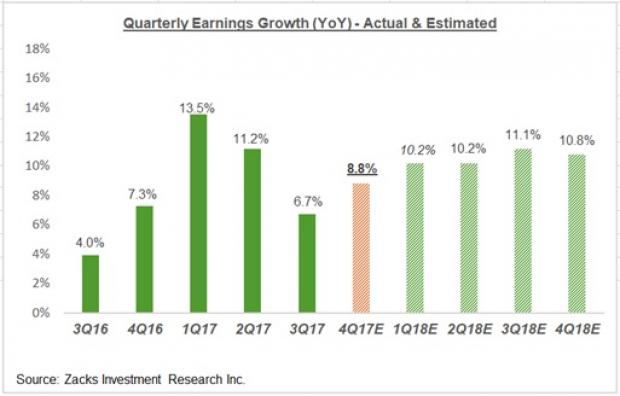 The chart below shows the weekly reporting calendar for the S&P 500 index. As you can see, we have only 7 index members reporting results this week, with the earnings season really ramping up the following week.

Here is a list of the 24 companies including 7 S&P 500 and reporting this week.