Note: The following is an excerpt from this week’sEarnings Trends report. You can access the full report that contains detailed historical actual and estimates for the current and following periods, please click here>>>

•    The standout features of the Q4 earnings season continue to be very strong revenue momentum, a preponderance of positive surprises and positive revisions to estimates for the current and coming quarters.

•    This is a materially better performance relative to what we have been seeing from the same group of companies in other recent periods.

•    For Q4 as a whole, total earnings for the S&P 500 index are expected to be up +13.9% from the same period last year on +8.6% higher revenues. Earnings growth is expected to be positive for 15 of the 16 Zacks sectors, with double-digit growth for the Energy, Technology, Aerospace, Construction, Industrial Products, Basic Materials, Business Services, Retail, Utilities, and Autos sectors.

•    As expected, companies are announcing big one-time charges related to the tax law change, which is making the gap between adjusted operating earnings and GAAP earnings the highest in recent years.

We now have Q4 results from 470 S&P 500 members that combined account for 97.1% of the index’s total market capitalization. Total earnings for these 470 index members are up +14% from the same period last year on +8.5% higher revenues, with 77.2% beating EPS estimates and 76% beating revenue estimates.

The comparison charts below compare the results thus far with what we have seen from the same group of 470 index members in other recent periods.

First, there is clear momentum on the revenue front, with both the growth pace as well as the proportion of positive top-line surprises tracking above historical periods. The comparison charts below compare top-line performance for the 470 index members that have reported results already. 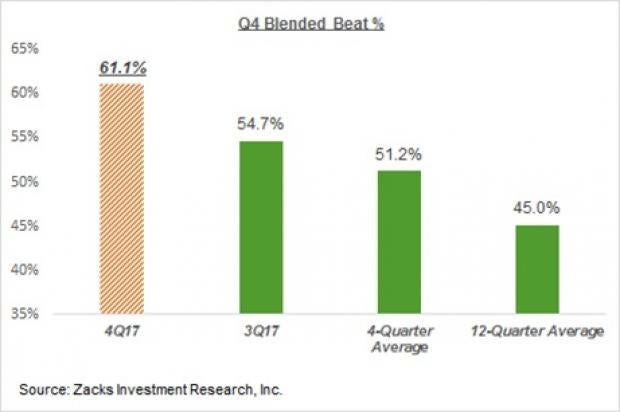 A high proportion of positive surprises is typically not a big deal given management teams’ expertise in anchoring expectations at easy-to-beat levels. We typically see this show in lowered estimates ahead of the start of earnings seasons. But what makes this above-average proportion of positive surprises notable is the fact that estimates for Q4 had held up very nicely ahead of this earnings season.

Third, the gap between adjusted operating earnings and GAAP earnings is extremely high, as the comparison chart below shows. 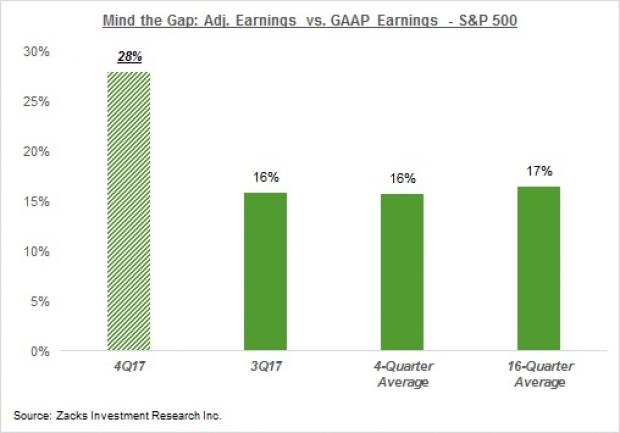 The all-around one-time charges this earnings season pertain to the accounting impact of tax-law changes, which we are stripping out of our (adjusted) earnings numbers for comparability reasons. The chart above shows that adjusted earnings have historically been 16-17% higher than GAAP earnings for the 470 index members that have reported results already, but they are a very high 28% in Q4.

There is no question that these are one time and non-cash charges. But the wide gap between adjusted and GAAP earnings this earnings season is nevertheless an unflattering comment on the ‘quality’ of the earnings performance.

Fourth, is the unusually positive revisions trend for the current and following quarters. The chart below shows how 2018 Q1 earnings growth expectations have evolved since early December. This is a sight that we haven’t seen in a very long time; definitely not over the last 6 years. 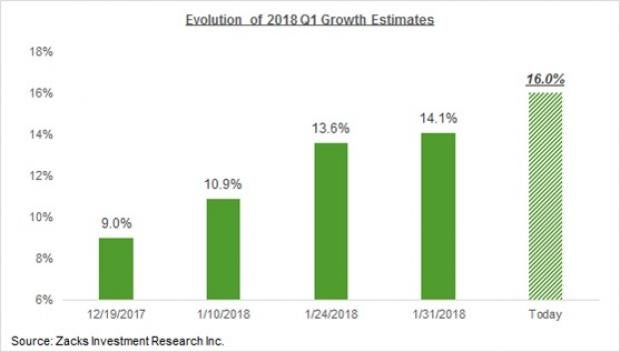 The most important factor driving this positive revisions trend is the tax cuts. The rise in oil prices and the impact of uptrend bond yields on banks’ profitability are some of the other factors.

Estimates have gone up across the board for 13 of the 16 Zacks sectors, with the Conglomerates sector as the only to have suffered modest negative revisions, primarily a reflection of the never-ending General Electric (GE - Free Report) saga. Estimates have gone up the most, in dollar terms, at the Finance sector, followed by Technology, Energy, Medical and the others.

The chart below contrasts the Q4 earnings growth rate with what was actually achieved in the last 5 quarters and what is expected in the coming four periods. 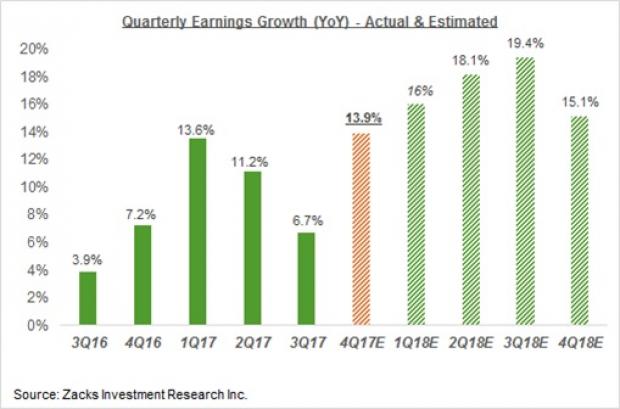 Stepping back from the quarterly picture and looking at the growth trajectory on an annual basis, earnings growth resumed 2017 after flat-lining in the preceding two years, with total S&P 500 earnings on track to increase +7.7% in 2017 on +4.8% higher revenues. 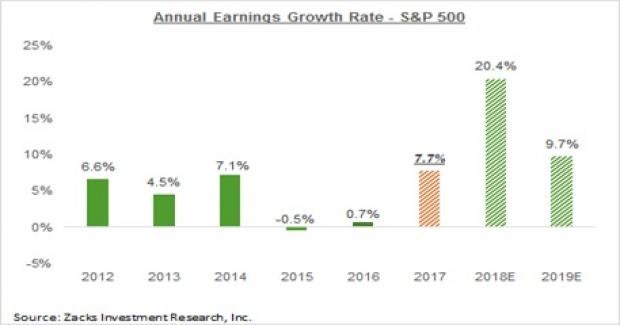 But as you can see in the chart above, the growth pace is expected to accelerate meaningfully in 2018, with the growth pace steadily going up in recent weeks to reflect the impact of tax law changes.