The Zacks Rank methodology is a unique way to discover some of the best companies to invest in, and is a useful tool for beginner and more experienced investors alike; it identifies companies both big and small that have the right characteristics to produce superior gains.

When a company earns that coveted Zacks Rank #1 (Strong Buy) label, its means they have a high probability of outperforming the market over the next one to three months. But, achieving this high rank is not an easy thing to do, as only 5% of companies within the Zacks Rank universe earn this position.

Below, we highlight a stock that has evolved into a strong player in the broad cloud industry, and by following our ranking system, investors could have realized major gains.

Red Hat is one of the world’s leading providers of open source software solutions. Based in Raleigh, NC, it uses a community-based approach to offer reliable and high-performing cloud, Linux, middleware, storage, and virtualization technologies, as well as award-winning support, training, and consulting services. Red Hat hopes to create relevant, innovative technologies that free resources for growth and prepare customers for the future of IT.

Going into its first-quarter fiscal 2018 earnings report on June 20, RHT was a Zacks Rank #3 (Hold). Red Hat beat both top and bottom line estimates, with revenues growing 19% year-over-year. Subscription revenues, which represented 88% of total revenues for Q1, also rose 19% from the prior year period thanks to double-digit increases from its Infrastructure-related and Application Development-related offerings.

These strong results helped management raise its fiscal 2018 guidance. As a result, RHT moved up to a #2 (Buy) on the Zacks Rank on June 23, and soon after, it was added to the #1 (Strong Buy) list on July 7. At the closing bell that day, the company’s stock price was $96.55 per share. RHT was able to keep its Strong Buy status streak alive for many weeks afterwards.

By the time the company reported its Q2 results, it had slipped back down to a #2 (Buy). Earnings and revenues beat the Zacks Consensus estimates, with Application Development and emerging technologies subscription revenues driving the company’s top line. Red Hat saw more than 60 deals valued over $1 million during the quarter as well. Management raised its 2018 guidance again in Q2, and the combination of strong results and forecast helped push RHT back into #1 (Strong Buy) territory on October 13. Four months after becoming a #1 pick, the company’s stock price increased over 25% to $121.10 per share.

The cloud player remained a #1 (Strong Buy) almost until the end of October, and fell back down to a #2 (Buy) on October 27. RHT impressively kept that Buy rank until the end of the year, and posted strong Q3 results during that time frame. Right now, the stock is back to a Hold, but has climbed to nearly $150 per share, reflecting a roughly 55% gain in the last eight months or so since Red Hat first became a Strong Buy.

Here, this table shows the price performance of RHT (in red), as well as the 12-month forward looking EPS estimate (in green) from about a year ago until the close of the bell on March 5. 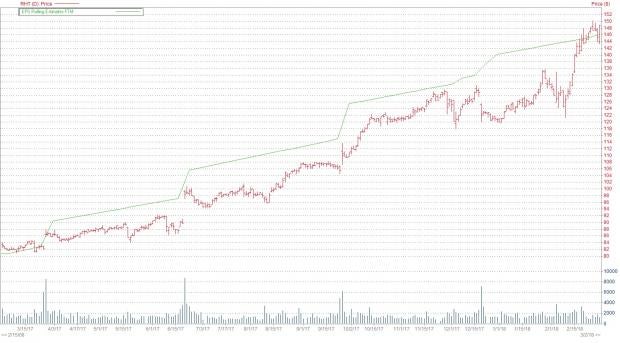