The picture emerging from the Q1 earnings season, which has now crossed the halfway mark, is one of all-around strength, with Q1 earnings and revenue growth on track to reach its highest level in 7 years.

This is a good showing, but two aspects of this earnings season hold us back from calling it a great performance. First, estimates for the current period have failed thus far to go up, as had been the case ahead of the start of the Q1 earnings season. Second, positive surprises are tracking above historical periods, but they remain below what we had seen in the preceding earnings season, particularly on the revenue front.

Many of you will justifiably look at these issues as nothing more than nit-picking and we acknowledge the all-strength and growth momentum as well. But we can’t ignore the fact that Q1 performance lags what we saw in the preceding earnings season in some respects, particularly how the 2018 Q2 revisions trend is shaping up, as the chart below shows. 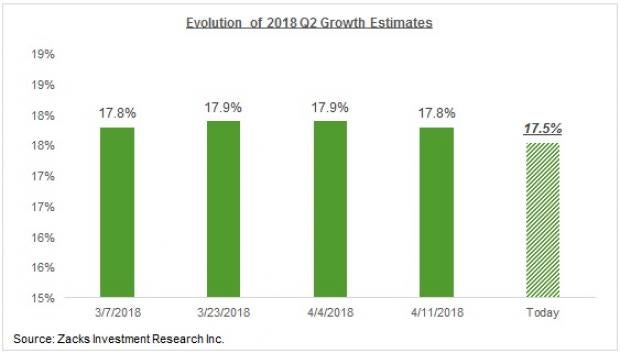 We have a busy reporting docket this week, with more than 900 companies reporting Q1 results, including 142 S&P 500 members, and the revisions trend could turn around. But if we haven’t seen evidence of positive revisions thus far, the odds are that we wouldn’t see them in the coming days either.

McDonald’s (MCD - Free Report) and Apple (AAPL) are the more notable of the 142 index members coming out with results this week. Other major companies this include Pfizer (PFE) and Under Armour (UAA) on Tuesday, May 1st, MasterCard (MA) on Wednesday May 2nd and Activision-Blizzard (ATVI) on Thursday May 3rd.

McDonald’s (MCD - Free Report) – McDonald’s is the notable of the 12 S&P 500 members reporting Q1 results on Monday, April 30th. The fast-good giant is expected to earn $1.67 per share on $4.93 billion in revenues, up +13.6% and down -13.8% from the year-earlier period, respectively. The revisions trend has been stable, though estimates have modestly come down over the last two months. The stock has struggled since late January, down -7.2% in the year-to-date period, lagging the S&P 500 index’s almost flat showing in the same period.

Apple (AAPL) – Apple will be in the spotlight on a very busy reporting day on Tuesday, May 1st. The iPhone maker is expected to earn $2.69 per share on $61.1 billion in revenues, up +28.1% and +15.5% from the year-earlier period, respectively. The revisions trend has been negative, with the current $2.69 EPS estimate down from $2.71 a month back and $2.84 three months back. As always, the focus will be on iPhone sales, which are expected to have reached 52.94 million in Q1, up from 50.76 million units in the year-earlier quarter. The company came up short of iPhone shipments expectations in the December quarter when it sold 77.3 million versus expectations of 79.8 million. The stock has lagged the Tech sector in the year-to-date and trailing 12-month period.

Total earnings for the 267 S&P 500 members that have reported results already are up +25.1% from the same period last year on +10% higher revenues, with 76.8% beating EPS estimates and 73.8% beating revenue estimates. The proportion of companies beating both EPS and revenue estimates is 61.4%.

To put these results in a historical context, the charts below compare the results thus far with what we had seen from the same group of 267 index members in other recent periods.

As mentioned earlier, earnings and revenue growth rate and the proportion of positive EPS surprises is tracking above what we have been seeing from the same group of 267 index members. But revenue surprises aren’t as widespread as was the case in the preceding earnings season.

In other words, the revenue growth momentum that we have been seeing over the last couple of earnings seasons is still in place, but revenue surprises are tracking below what we had seen in the preceding period and only in-line with the 4-quarter period, as the chart below shows.

For the Tech sector, we now have Q1 results from 64.7% of the sector’s total market cap in the S&P 500 index. Total earnings for these Tech companies are up +31.3% from the same period last year on +11.4% higher revenues, with 92.9% beating EPS estimates and 89.3% beating revenue estimates.

The comparison charts below put the sector’s Q1 performance thus far in a historical context.

Looking at Q1 as a whole, combining the actual results that have come out with estimates for the still-to-come companies, total earnings for the S&P 500 index expected to be up +22.6% from the same period last year on +8.4% higher revenues. This would follow the +13.4% earnings growth on +8.6% revenue growth in the 2017 Q4 earnings season, the best quarterly performance in 7 years. 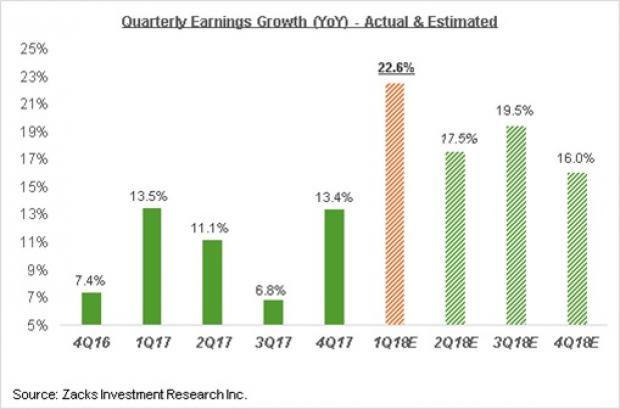 As you can imagine, expectations for full-year 2018 are for an impressive showing, with total earnings for the S&P 500 index expected to be +18.5% from the year-earlier level on +5.5% higher revenues. If achieved, this will be the highest annual growth pace for the index since 2010. 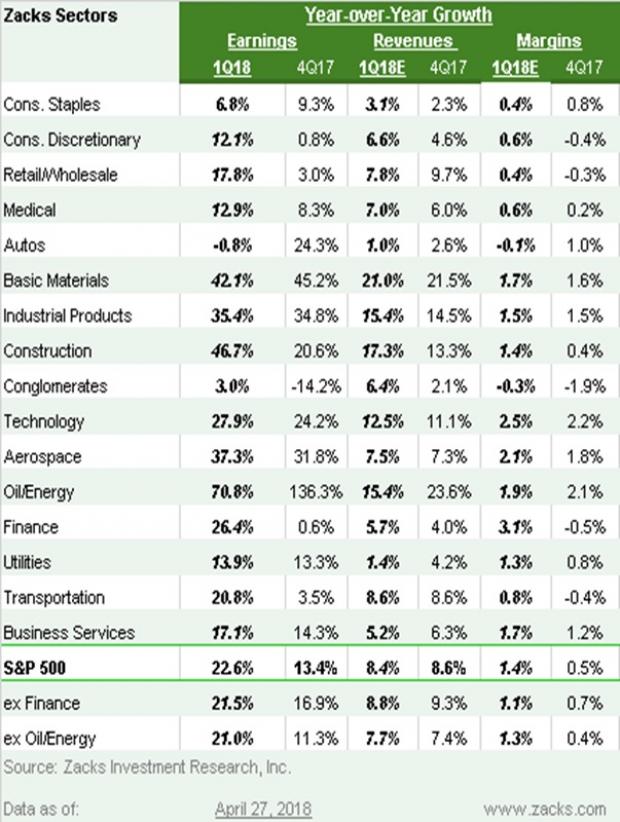 As you can see, the Energy sector remains a big growth contributor in Q1, with total earnings for the sector expected to be up +70.8% from the year-earlier period on +15.4% higher revenues. But growth for the quarter would still be in double-digits even on an ex-Energy basis (last row in the table above).

What is driving the strong Q1 growth isn’t the Energy sector, but rather the breadth of growth across all sectors, with double-digit earnings growth for 13 out of the 16 Zacks sectors, including Technology and Finance.

For the Technology sector, total Q1 earnings are expected to be up +27.9% on +12.5% higher revenues, which would follow the sector’s impressive +24.2% earnings growth on +11.1% higher revenue growth.

The Finance sector, which sat out the preceding quarter with an essentially flat showing, total Q1 earnings are expected to be up +26.4% from the same period last year on +5.7% higher revenues.

The Technology sector, on the other hand, has already been on stronger ground, with full-year 2017 earnings for the sector up +15.8% and expected to be up +17.4% in 2018. The enterprise spending environment was expected to improve this year even before the tax cuts, with the tax windfall expected to give a much needed boost to those trends. On top of these we have the existing secular trends in cloud computing, artificial intelligence and big data that are expected to remain growth areas in the space.

Is the Earnings Picture Really That Strong?