Companies operating in the funeral services industry prepare the deceased bodies for burial or cremation and organize memorial services. As death is inevitable, demand for this industry’s services never exhaust. In fact, players in the industry generate significant revenues from the entire funeral process that entails high costs associated with embalming, caskets, vehicles, funeral staff and equipment among others.

Markedly, the U.S. funeral services industry generates more than $16 billion in annual revenues, with $8,000 being the average cost per burial. However, the industry has turned quite competitive of late, owing to consumers’ rising inclination toward cremations over traditional burials. Further, use of alternative channels, such as e-commerce, to buy funeral related products has increased competition.

Increased demand for cremation has been weighing on revenue per client of the funeral services industry, which is expected to witness a slowdown over the 2018-2023 period. Cremations cost significantly less than traditional funerals, with the average cremation service cost being roughly $2,500. Though a rise in mortality rates and the aging baby boomer population is likely to work in favor of the industry, increasing preference for cremation is expected to hinder growth.

While an increase in death rate bodes well for companies in the funeral services space, consumers’ shift toward low-cost cremation services has been taking a toll on the industry. Evidently, the Zacks Funeral Services Industry, within the broader Zacks Consumer Staples Sector, has underperformed the S&P 500 over the past six months, though it has performed better than its own sector.

Stocks in this industry have dipped almost 2% over the past six months. Meanwhile, the Zacks S&P 500 Composite has gained 2.6%, whereas the Zacks Consumer Staples Sector has lost nearly 6%.

As the industry has underperformed the broader market, the valuation looks slightly cheap now. One might get a good sense of the industry’s relative valuation by looking at its price-to-earnings ratio (P/E), which is the most appropriate multiple for valuing Consumer Staples stocks like funeral services because earnings are effective in gauging performance.

This ratio essentially measures a stock’s current market value relative to its earnings performance. Investors believe that the lower the P/E, the higher the value of the stock will be.

The industry currently has a trailing 12-month P/E ratio of 19.6, which is below the one-year median level of 21.5 and the one-year high of 22.5 over the past year.

The space also looks attractive when compared with the market at large, as the trailing 12-month P/E ratio for the S&P 500 is 20.7, which is in line with the median.

The funeral services industry remains shielded by steady demand for funeral services. Also, the aging baby boomer population presents solid opportunities to players in this industry. However, competition from cremation services as well as e-commerce sales channels is likely to keep the industry under pressure.

But what really matters to investors is whether this group has the potential to perform better than the broader market in the quarters ahead. The above ratio analysis shows that there is a solid value-oriented path ahead. However, one should look for good entry points based on solid fundamentals and other near-term factors.

One reliable measure that can help investors understand the industry’s prospects for a solid price performance going forward is its earnings outlook. Empirical research shows that earnings outlook for the industry, a reflection of the earnings revisions trend for the constituent companies, has a direct bearing on its stock market performance.

This becomes clearer when we focus on the aggregate bottom-up EPS revisions trend. The chart below shows the evolution of aggregate consensus expectations for 2018.

As you can see here, the $1.84 EPS estimate for 2018 has dropped from $1.85 at the end of June and $1.87 at the end of May. In other words, the sell-side analysts covering the companies in the Zacks Funeral Services industry have been lowering their estimates.

The group’s Zacks Industry Rank, which is basically the average of the Zacks Rank of all the member stocks, indicates continued underperformance in the near term.

The Zacks Funeral Services industry currently carries a Zacks Industry Rank #223, which places it in the bottom 13% of more than 250 Zacks industries. Our research shows that the top 50% of the Zacks-ranked industries outperforms the bottom 50% by a factor of more than 2 to 1.

Lower taxes and cost-optimization efforts seem to be working well for the companies in the funeral services space of late. Notably, the earnings trend reveals that the group has been witnessing a rising trend since 2012.

The top-line performance of the Zacks Funeral Services depicts a decline from 2014 to 2016, though it picked up a little in 2017.

Clearly, the choice between cremation and burial is crucial for the funeral services industry. Unfortunately, in 2017, the Cremation Association of North America projected cremation rate to rise 71% by 2030. The growing popularity of cremation services is likely to weigh on death care service providers, as it will lead to declines in sales of casket, urns and keepsakes, alongside denting cemeteries sales.

Competition from e-commerce sales and low-cost alternatives also remains a worry for the funeral services space. Markedly, consumers are choosing shrouds and woodland burials over coffins and graveyards, while tech advancement has also encouraged them to opt for video tributes. That being said, demand for the industry’s services remains inexhaustible. In fact, United States has witnessed sharp rise in mortality rates over the last year, which has been beneficial for companies in the funeral services space.

Nonetheless, companies in the industry need to come up with new strategies to survive amid changing consumer trends. On that note, we bring to focus a stock from the industry investors should steer clear of.

StoneMor Partners L.P. This Pennsylvania-based company has lost 38% over the past year. The company, which has seen its loss per share estimates widen over the past 30 days, currently carries a Zacks Rank #4 (Sell).

Despite the industry headwinds, there are few stocks investors may hold on to.

Service Corporation International (SCI - Free Report) , with a Zacks Rank #3 (Hold), has gained almost 15% in the past year. Further, the Zacks Consensus Estimate for the current year EPS has remained stable in the last 30 days. 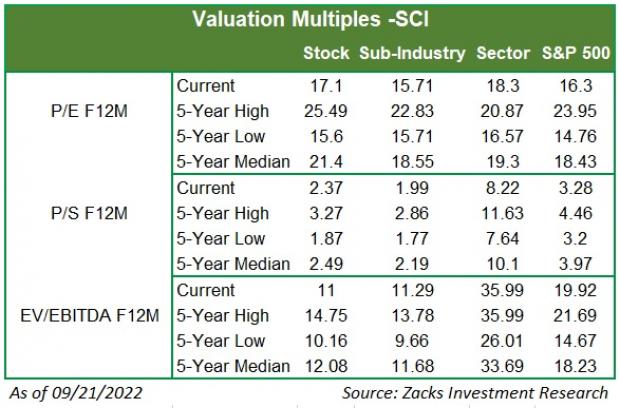 Hillenbrand, Inc. (HI - Free Report) , which has rallied 42.3% in the past year, also carries a Zacks Rank #3. The Zacks Consensus Estimate for current fiscal EPS has remained stable in the last 30 days.