The original story appears below

During the trading halt in shares of Tesla after CEO Elon Musk's tweets, an internal Tesla email was released in which Musk addressed employees, laying out his plan to take the company private.

-He explained that the pressures of being a public company impeded management's ability to act in the long-term interests of the company instead of focusing on short term market impact.

-He stated that the deal is not about gainiing more control of the company for himself and that his ownership stake of approximately 20% would remain essentially unchanged.

-He stated that Tesla and SpaceX would not be combined, but would retain seperate ownership, management and governance.

-He said that all shareholders would be given a choice to remain stakeholders in the company in a seperate trust structure if they elected not to sell their shares at the $420/share price.

-He left open the possibility that Tesla could return to the public equity markets at some point in the future after becoming a more "mature" company.

Virtually all specific aspects of the deal remain to be disclosed - including the source of the financing that Musk mentioned in his initial tweet - but it certainly appears that Musk believes that a shareholder vote will be forthcoming. He would have violated countless securities laws if any of today's information turns out to be intentionally incorrect.

Tesla shorts suffered losses of approximately $1.5 billion bringing the short pain to almost $4 billion in the past 2 weeks.

In a developing story, Telsa (TSLA - Free Report) shares are rallying strongly today on two breaking news stories. First, it was reported by the Financial Times early in the trading day that the Saudi Arabia Sovereign Wealth fund had acquired between 3% and 5% of the company worth around $2 billion. The stake is below the 5% threshold at which an investor would have to publicly disclose the stake per SEC rules.

The investment makes sense as part of the fund’s “Vision 2030” plan which seeks to significantly diversify form oil and oil-related assets over the next 12 years. An ownership stake is an obvious hedge against a long-term decline in demand for oil as consumers make the switch to electric vehicles. It would also seem to alleviate concerns about Tesla’s ability to raise additional capital as a deep-pocketed investor would likely be an easy source of operating cash if it were needed.

The company declined to comment on the news and the shares rallied about 5% intraday.

Then it got much more interesting.

Speculation followed about whether the tweet might be a prank or the activity of hackers. Typically, a company would ask the exchanges for a trading halt before making an announcement of this magnitude, but as all investors surely know by now, Tesla is anything but typical.

A buyout of Tesla at $420/share would give the company a value of $71 billion, an increase of more than $13 billion from Monday’s closing price.

In response to other Twitter users, Musk continued to tweet and without outright confirming a specific plan to take the company private, seemed to suggest that such a plan was at least being considered. 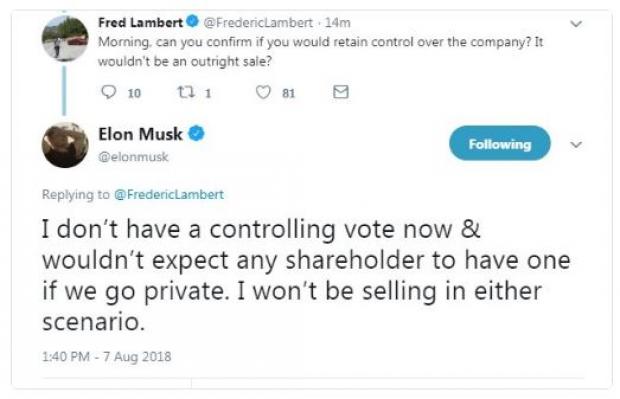 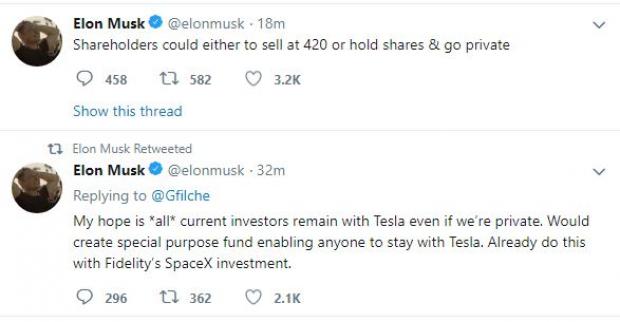 The stock was in fact halted for “News Pending” just after 2pm Eastern time, with the last trade of $367, up better than 7% on the day.

We will follow up with as much information as possible as it becomes available.

How to Play the Next Big Stock Surge