Is Elon Musk Crazy, or Crazy Like a Fox?

It’s been a interesting week to say the least for electric car manufacturer Tesla (TSLA - Free Report) , and behind it all are the words and actions of its eccentric-genius CEO Elon Musk. To say that Musk’s behavior has been non-conventional would be a dramatic understatement. His announcement via Twitter on Tuesday that he was considering taking Tesla private at $420/share and had “funding secured” sent the shares skyward from $350 to $380 - although since then speculation about whether and how a deal of that sort might happen and scant details from Musk or Tesla itself about his plan to finance the deal have caused the stock to pull back to $355/share.

Tesla’s board of directors issued a brief press release Wednesday confirming that they were in fact considering a proposal to take the company private.

Typically in a situation like this in which a public company was publicizing that they were considering a major corporate action, management would contact the listing exchange and ask for a trading halt so that they could make the appropriate announcement and let the markets digest the information in an orderly fashion before trading resumes. At roughly the same time, the company typically files form 8-K with  the SEC, which is intended to notify investors of a significant event.

Musk’s tweet came during market hours with no halt requested until the NASDAQ exchange requested it from the company.

The 8-K is posted publicly, allowing the investing public to consider all of the important details of the event and they may include financial statements, press releases, data tables and any other information required to allow the markets to understand the event and decide whether the event should affect the price of the shares.

Tesla – like all companies – routinely files form 8-K, even for relatively mundane occurrences like a change in a management position, a change in the terms of company debt or the details of a press release, but so far, no form 8-K seems to have been filed yet regarding the proposed private buyout.

In a word, no.  At least it doesn’t seem that way, though he is dancing pretty close to that fire.

The SEC decided all the way back in 2013 that social media was a legitimate way for public companies to disseminate information, provided the company formally notifies investors where information will be available. Tesla has complied with these guidelines.

There has been much speculation about the phrase “funding secured” all the way down to parsing the semantics of the word “secured” instead of “confirmed” or “committed”, but at the time being, there’s no indication that Musk said anything that is materially false - which would be a violation of securities laws.

The laws are generally meant to prohibit “pump and dump” schemes, usually in small stocks, in which an investor with an existing position intentionally disseminates false information and then uses the resulting market reaction to liquidate that position at favorable prices.

CNBC commentator and ex-hedge fund manager Jim Cramer – incidentally, no stranger himself to claims of market manipulation – pointed out on Wednesday that in this case “there was no dump.” That is, Musk did not use the rally to sell any of his shares in the company.

The notoriously confident Musk even continued to taunt those with short positions in Tesla with a prank aimed at famous short seller David Einhorn in which he mailed the hedge-fund manager a box of actual short pants.

Einhorn and his firm, Greenlight Capital are probably best known for their outstanding returns during the financial crisis when they correctly surmised that several major investment banks were in trouble and made outsized profits with short positions in those banks.

Einhorn, himself a clever individual and semi-pro poker player who often donates his winnings to charity, got in a dig of his own when he replied via Twitter that the shorts “did come with some manufacturing defects,” an obvious reference to reports that Tesla’s Model 3s were being assembled hastily in the push to ramp up production and were consequently of lower quality than the company’s previous Model S and Model X. 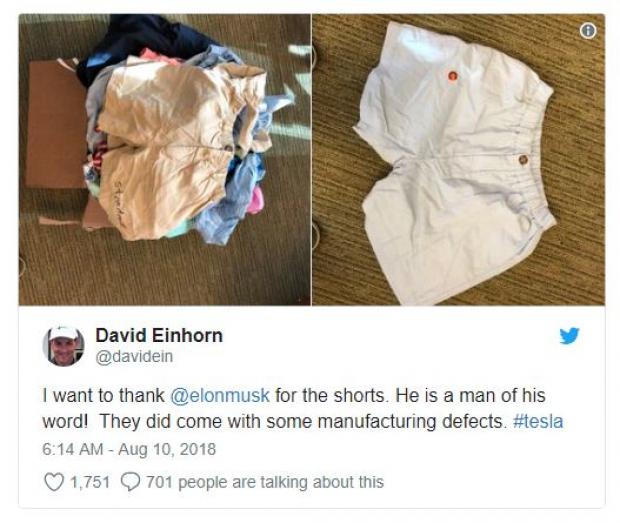 In a poker analogy, the fact that Musk is light-heartedly joking about the deal and its potential negative effects on short-sellers of the stock would seem to imply that he’s holding a great hand that he’s not showing yet.

Or of course it could also be a bluff.

Is the Financing “Secured”?

Funding for the proposed deal does not have to involve a single buyer or lender committing the full $72 billion dollars. ($72 billion is an estimate, as the actual number of shares involved depends on the exercise of outstanding company stock options and the conversion of convertible debt, but it’s a reasonably close figure.) Given Tesla’s relatively poor credit ratings, a traditional leveraged buyout is unlikely, but there are other ways to make the deal happen.

Musk has explained that existing shareholders would be given the choice to tender their shares for $420 in cash, or retain ownership of the same equity stake in a private structure.

Tesla would need a majority shareholder vote to approve any deal.  If 100% of existing shareholders chose to retain their stakes in a private entity, the deal could theoretically be done for zero dollars in cash. Musk himself owns approximately 20% of shares and he has stated his intention to retain that position even if the company is taken private. As of the most recent 13-F filings, institutions own another 63% of shares, with the top five holders combining for ownership of approximately 33%. That doesn’t include the Saudi Sovereign Wealth Fund, which it was announced this week has acquired almost 5% of Tesla on the open market.

In short, Musk would only need the agreement of a handful of existing shareholders, along with their commitment to purchase any tendered shares to gain a majority and truthfully say the financing was “secured.”

This is speculation of course, as Tesla and Musk have been tight-lipped so far about the details of their plan. To continue the poker analogy, Musk just shoved a big pile of chips into the middle and dared everyone at the table to make the call. Betting against him certainly hasn’t worked in the past but we’ll have to wait and see for a bit longer to find out how this hand turns out.

The only thing we know for sure is that it will be interesting.

5 Medical Stocks to Buy Now Zacks names 5 companies poised to ride a medical breakthrough that is targeting cures for leukemia, AIDS, muscular dystrophy, hemophilia, and other conditions. New products in this field are already generating substantial revenue and even more wondrous treatments are in the pipeline. Early investors could realize exceptional profits. Click here to see the 5 stocks >>