Move over delta variant… people want to spend some money! Yesterday’s surprise retail sales report proved how tired they are of this pandemic. The print rose by 0.7%, which destroyed expectations for a loss of 0.7% and marked a dramatic turnaround from July’s more than 1% plunge.

As a result, the Market Beating Growth Stocks screen is full of retail names right now. In addition to looking for Zacks Rank #1s (Strong Buys) with an “A” for a Zacks Growth Style Score, this strategy also wants to see stocks with projected EPS growth of 20% or more. In other words, we want the biggest growth rates to go along with those rising estimate revisions.

Below are three retailers that recently passed the test.

If the market was just one big runway, then The TJX Companies (TJX - Free Report) would be one of the sexist models on the show. Not because it has the latest fashions out of Paris or Milan, but because it’s one of the country’s biggest off-price retailers. And paying less to look good is always a beautiful idea.

TJX has more than 4,300 stores across the globe. It operates through two segments domestically: 1) Marmaxx, which handles the well-known T.J. Maxx and Marshalls brands, accounted for 60.3% of fiscal year 2021 sales; and 2) HomeGoods, a popular home décor brand, made up 18.9% of last year’s sales. Furtermore, TJX International and TJX Canada accounts for 12% and 8.8%, respectively.

The company really showed off in its fiscal second quarter report last month. Earnings per share of 79 cents easily beat the Zacks Consensus Estimate by over 36%. TJX now has a four-quarter average surprise of more than 33%... and that includes a miss earlier this year. This track record shows that when the company beats, it beats big!

Net sales were nearly $12.1 billion in the quarter, which was 81% better than the same quarter in fiscal 2022 and ahead of our expectation of $11.2 billion. However, the pandemic was really wreaking havoc in that year-ago quarter with the company’s stores closed for approximately 31% of the time.

TJX is much more impressed that fiscal second-quarter net sales advanced 23% from the same time in fiscal 2020… before the pandemic changed things.

The company’s HomeGoods category was really the standout as people have been putting more emphasis on the home. Its open-only comp store sales jumped 36% in the quarter. 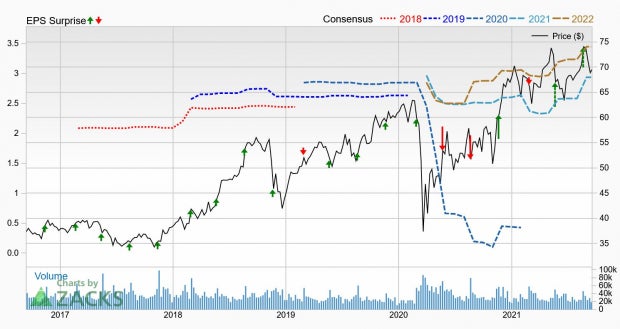 Kohl’s Corp. (KSS - Free Report) sells clothes too, but it only has a fraction of TJX’s market cap. However, this regional department store can boast a few things that many retailers can’t in the current environment, namely a raised outlook for fiscal 2021 and a year-to-date surge of more than 30%.

KSS operates specialty department stores and an e-commerce site. It has more than 1100 stores across 49 states where they offer moderately-priced apparel, footwear and accessories, as well as beauty products and home articles. As part of the retail – regional department stores space, KSS is in the top 1% of the Zacks Industry Rank.

It outlined a strategic plan in October of last year that really seems to be working. The four key areas of the plan include: driving topline growth; expanding operating margin; disciplined capital management; and undertaking an agile organizational culture.

But KSS thinks this is just the beginning, as it’s launching several “transformational partnerships that will drive sustainable growth for years to come”. For example, it already has a relationship with Amazon and now has a partnership with Sephora as well.

And that’s why this company felt comfortable enough to raise its outlook for the full year, while many of its peers continue to sit on their hands and wait for better days.

KSS now expects net sales in the low-20s percentage range, instead of the earlier forecast of mid-to-high teens. Furthermore, adjusted earnings per share are now planned for between $5.80 and $6.10, marking a nice boost from the previous call of $3.80 to $4.20.

Analysts have been raising their expectations as well. The Zacks Consensus Estimate for this year (ending January 2022) has soared over 50% in the past 60 days to $6.09. The outlook for next year (ending January 2023) gained more than 30% in that time to $6.21, which suggests a slight year-over-year advance with enough time for plenty of improvement going forward. 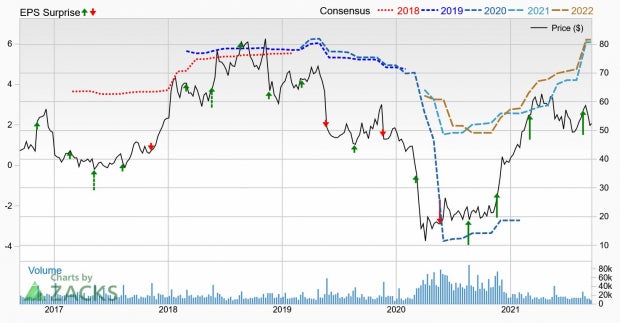 Here’s a dirty little secret about getting back to normal that most people just won’t talk about: if you’re going to be leaving the house again, you’ll have to get back into the habit of wearing shoes. And we’re not just talking about slippers or a thick pair of socks with tread on the bottom. We mean real shoes with soles and maybe even laces (though slip-ons are acceptable).

Skechers U.S.A. (SKX - Free Report) doesn’t consider this to be a problem. This footwear staple, with brands that include the popular GO RUN and GO WALK lines, thinks you can be just as comfortable in their shoes as you are barefoot. In fact, the company is confident enough to call itself “The Comfort Technology Company™” … and it has the numbers to back up that claim.

For example, shares are up more than 26% so far this year, while its membership in the shoes & related apparel space means its in the top 9% of the Zacks Industry Rank.

Strong wholesale and direct-to-cost sales led to an impressive second-quarter performance. Sales of nearly $1.7 billion topped the Zacks Consensus Estimate of just under $1.5 billion and improved 127.3% year over year or 31.7% over the same quarter in the pandemicless 2019. Domestic sales surged 147.3%, while international improved 113.7%.

Earnings per share of 88 cents easily surpassed the Zacks Consensus Estimate by more than 69%. The company has amassed an average positive surprise of more than 34% over the past four quarters… and that includes a miss in the fourth quarter of 2020.

The past 60 days have seen analysts make sharp increases in SKX’s earnings estimates. The Zacks Consensus Estimate for this year is now at $2.68, which marks a more than 28% advance in two months. Next year is up to $3.04, which accounts for a 16.9% advance and suggests a year-over-year improvement of more than 13%. 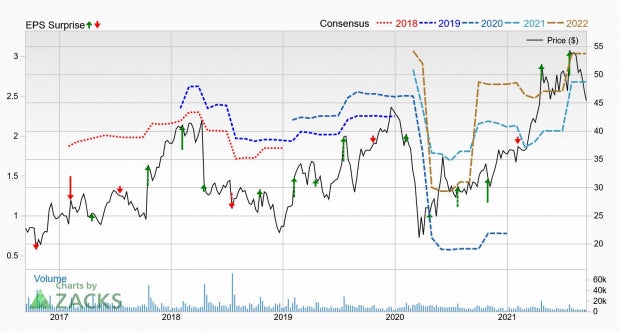 Traders are Buying the Dip