The basic tagline on Alibaba Group (BABA - Free Report) since its 2014 Initial Public Offering has been that it’s the “Chinese Amazon.” At the time, it was the biggest IPO in history, raising $25B and giving Alibaba a market capitalization of $231B. To date, only Spotify (SPOT) has raised more money by going public, selling $29B worth of shares earlier this year.

The comparison to Amazon (AMZN - Free Report) made Alibaba a very popular holding, especially with U.S. investors. They had seen Amazon go from an innovative online bookseller to an enormous purveyor of an incredible variety of products, reshaping the retail landscape as it aggressively expanded into virtually every aspect of the business. Other retailers, including venerable Wal Mart (WMT - Free Report) , have been forced to change their strategies in the face of Amazon’s might. Many lesser firms have been marginalized or forced out of business, prompting the coining of a new phrase that’s applied when traditional retailers lose market share to the reigning retail king – “getting Amazoned.”

The Alibaba opportunity is obvious. With a population of more than 1.3 billion and a growing middle class which increasingly desires a wide range of once-unobtainable goods, Chinese retail represents an almost unfathomably large market and Alibaba is the biggest player. What’s not to like?

Alibaba has largely delivered on that original promise, becoming the world’s largest online retailer and, like Amazon, has expanded into Entertainment, Food Delivery, Fintech and Cloud Computing services. Revenues and earnings grew quickly and the share price more than doubled in less than four years, topping out at $210/share in June of 2018. Far from being exclusively Chinese, Alibaba operates in over 200 countries worldwide. 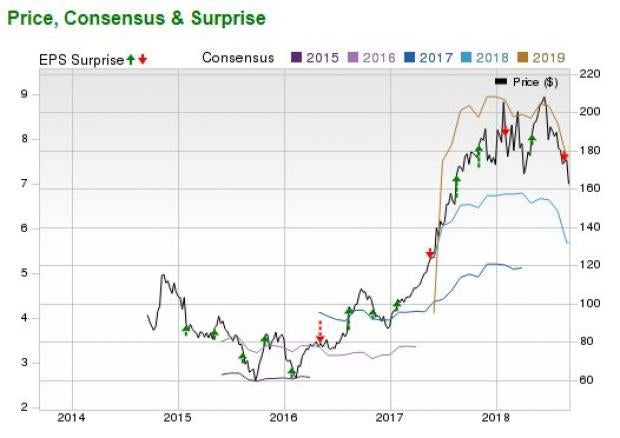 It’s been a rough period lately however, with reduced earnings estimates, concern about the strength of the Chinese economy and the recent announcement of the planned departure of founder and Chairman Jack Ma. Ma has actually not been CEO of the company since 2015, but now plans to leave the company entirely to pursue philanthropic activities full-time.

BABA shares are well off of their all-time highs, closing at $165.53/share on Thursday.

The story is a basic slowdown in earnings. The Zacks Consensus Earnings Estimate for 2018 is currently $5.69/share and although that still represents a 9% increase over the $5.24/share the company reported in 2017, it has fallen quickly from an expectation of $6.63/share 90 days ago. Nine negative revisions in the past 30 days earn Alibaba a Zacks Rank #5 (Strong Sell).

The prospect of deteriorating U.S. – China trade relations also negatively affects  Alibaba, with tariffs curtailing international trade and the possibility of a pullback in economic activity that reduces the ability of ordinary Chinese citizens to afford Alibaba’s goods.

It should be noted here that the Zacks Bear of the Day focuses on stocks whose prospects in the immediate future are poor relative to their peers and to the market as a whole. Investors who own these stocks are encouraged to examine whether their capital would be better invested in companies where future estimates are on the upswing. It is not a recommendation to short these stocks. This is especially true of Alibaba. Shorting involves a large capital commitment and unlimited risk and should be undertaken only when an investor is certain that a company is “on the ropes.” Alibaba is not one of those companies. While projections for the company are sufficiently negative to make investors question ownership of the shares, shorts could get burned badly if the clouds currently hanging over Alibaba lift.

Today's Stocks from Zacks' Hottest Strategies It's hard to believe, even for us at Zacks. But while the market gained +21.9% in 2017, our top stock-picking screens have returned +115.0%, +109.3%, +104.9%, +98.6%, and +67.1%. And this outperformance has not just been a recent phenomenon. Over the years it has been remarkably consistent. From 2000 - 2017, the composite yearly average gain for these strategies has beaten the market more than 19X over. Maybe even more remarkable is the fact that we're willing to share their latest stocks with you without cost or obligation. See Them Free>>

Bear of the Day: Autohome (ATHM)