Has the Earnings Picture Started Weakening?

Strength in corporate earnings has been a key source of support for the stock market, helping offset to some extent other worries about issues like trade uncertainty and the Fed outlook. The market will be looking for reconfirmation of earnings strength in the Q3 earnings season, which has gotten underway already but will really get going following October 12th releases from the big banks.

Our reading of the evolving earnings picture shows that while corporate profitability still remains very strong, it is not as strong and pristine as it was in the last few quarters. Overall growth reached its highest level in almost 8 years in each of the last two quarters, with the growth pace starting to decelerate in the second half of the year and into next year, as you can see in the year-over-year quarterly earnings growth chart for the S&P 500 index below. 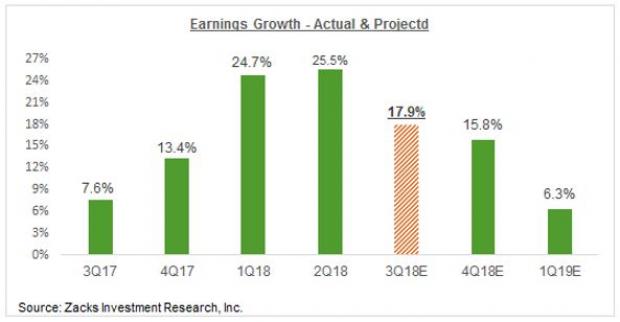 If we look at earnings growth for the S&P 500 index on a trailing 4-quarter basis, to smooth out the quarter-to-quarter variation, then the growth acceleration trend remains in place through 2018 Q4 before starting to trend down next year, as the chart below shows. 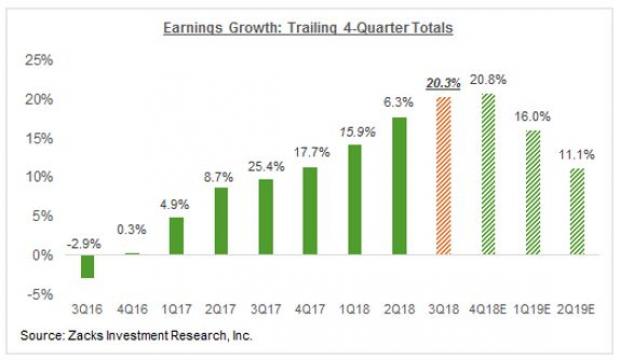 The above two charts of earnings growth show that growth has either peaked already or is close to peaking next quarter. But even more significant than growth deceleration is the fact that analysts have been cutting their earnings estimates for Q3 since the quarter got underway, as the chart below shows. 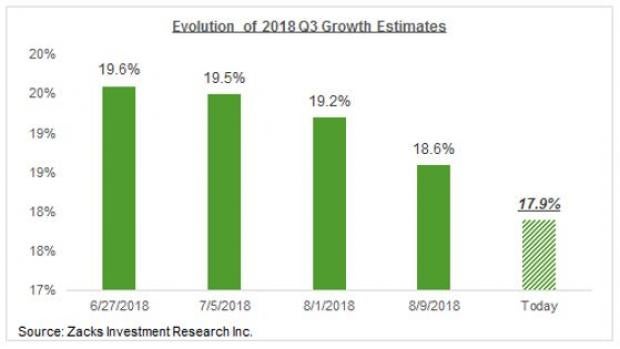 We will get into the thick of the Q3 earnings season in another two weeks, but the reporting cycle has gotten underway already, with results from 16 S&P 500 members out and another 5 index members on deck to report this week. All of these early reporters have fiscal quarters ending in August, but they get counted as part of the September-quarter tally.

All in all, we will have seen Q3 results from almost two dozen S&P 500 members by the time JPMorgan (JPM - Free Report) (unofficially) kicks-off this earnings season on Friday, October 12th.

The notable earnings reports coming out this week include:

Pepsi (PEP - Free Report) – Pepsi reports quarterly results before the market’s open on Tuesday, October 2nd, with the company expected to earn $1.56 per share on $16.38 billion in revenues, representing year-over-year gains of +5.4% and +0.9%, respectively. Estimates for the quarter have come down from the three-months back level, but they have been stable lately. The stock has been weak lately, down -7.4% in the year-to-date period, underperforming Coke’s (KO - Free Report) roughly flat stock price in the same time period.

This will be the last earnings release for the outgoing CEO, Indra Nooyi, who is stepping down on October 3rd after remaining in the CEO role for 12 years. The company has already named an insider to fill the CEO role and no issues are expected in the transition, though the market will be hoping for a strategy change from the new CEO.

Lennar (LEN - Free Report) – Lennar is expected to report results before the market’s open on Wednesday, October 3rd, with the homebuilder expected to earn $1.27 per share on $5.67 billion in revenues. Earnings per share for the quarter will be +19.8% higher from the year-earlier period while revenues would be up +73.9% from the same period last year. Shares of this Miami, Florida-based homebuilder have been struggling lately, as have the broader homebuilder space, on the back of unfavorable trends in interest rates and costs. Lennar shares are down -25.4% in the year-to-date period, underperforming the Zacks Construction sector’s -12% decline in the period.

Costco (COST - Free Report) – Costco reports results after the market’s close on Thursday, October 4th, with the retail giant expected to post $2.34 in EPS on $44.4 billion in revenues, up +12.5% and +5% from the year-earlier level, respectively. The revisions trend has been positive, with the current consensus EPS estimate for the quarter steadily going up since the start of the period. The stock has been standout performer this year, up +26.2% vs. +18.4% gain for the Zacks Retail sector, on the back of stellar top-line performance. U.S. comps accelerated to more than +7% in fiscal 2018 from less than +6% in 2017 and the average of about +5% in the five years prior to that. The stock was modestly down following each of the last two quarterly releases and will likely behave similarly following this report given how strong its recent performance has been.

The chart below shows the weekly calendar of earnings releases for the entire Q3 earnings cycle. As you can see, we are about three weeks away from the reporting cycle really ramping up.

The table below shows the summary picture for Q3, contrasted with what was actually achieved in 2018 Q2. 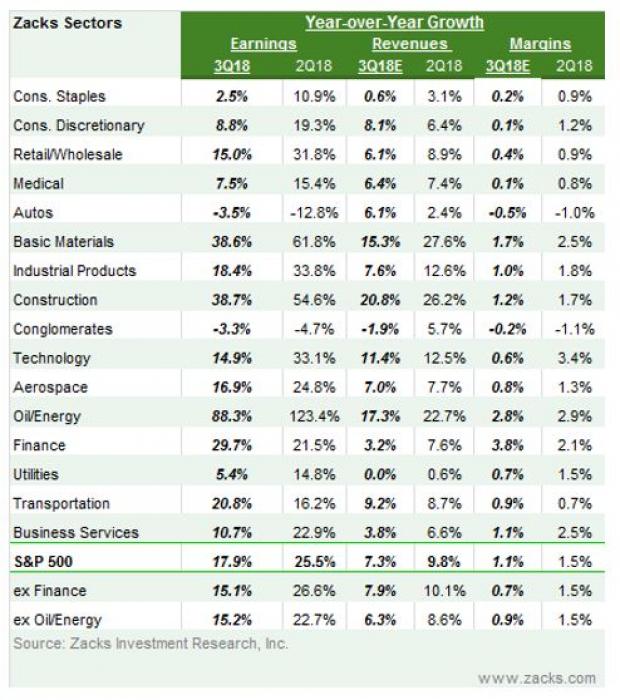 As you can see above, earnings growth is expected to be in double-digits for 10 of the 16 Zacks sectors, with the strongest growth in the Energy, Finance, Basic Materials and Construction sectors.

As mentioned earlier, we have Q3 results from 16 S&P 500 members already. It is hard to draw any firm conclusions from the results thus far, but total earnings for these 16 index members are up +26.8% from the same period last year on +10.6% higher revenues, with 81.3% beating EPS estimates and +62.5% beating revenue estimates.

This is not a representative sample of results, but the earnings growth pace is tracking below what we had seen from the same group of companies in the preceding quarter, as the chart below shows.

For more details about the overall earnings picture and the Q3 earnings season, please check our weekly Earnings Trends report.

What is Keeping Bank Stocks Down?