What is Keeping Bank Stocks Down?

Finance sector earnings were up +21.5% in the June quarter and the expectation is that growth in the Q3 earnings season, which JPMorgan (JPM - Free Report) , Wells Fargo (WFC - Free Report) and Citigroup (C - Free Report) kick-off with their results on Friday, October 12th, will likely be even better. But none of that shows up in the group’s stock market performance, with bank stocks one of the weakest performers in the market.

Bank stocks are down -0.8% this year, underperforming the broader market’s +8.5% gain, but modestly better than the Finance sector’s -3% decline. The group never got its mojo back after losing ground at the start of February, but continued to lead the S&P 500 through mid-March meaningfully diverging from the broader index around mid-May. The chart below shows the year-to-date performance comparison of the Zacks Major Banks industry and the S&P 500 index.

A number of factors likely account for this underperformance. The most important reason appears to be the flattening yield curve, though it has been steepening a bit in recent days. The flattening yield curve has implications for banks’ profitability, as banks’ net interest margins represent similar spread between their lending and borrowing rates.

The chart below shows the yield spread between 2 and 10-year treasury bonds over the past year (currently at 30 basis points, as of Wednesday, October 3rd). 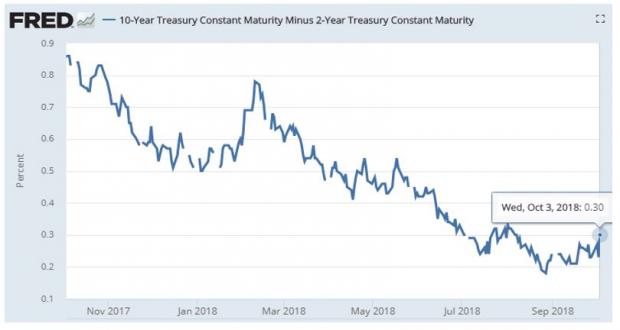 There is also the issue of deposit betas, the percentage of change in market interest rates that banks pass onto their depositors. Banks are typically fairly stingy with interest rates on their deposits, but competitive pressures force them to pass on the higher rates to their customers. As a result, deposit betas have been steadily going up, another negative for bank margins.

Both of these are legitimate points, but worries about them appear to over-done to us. The yield spread has started expanding again. But even if this nascent steepening trend of recent days reverses, as has happened a number of times before, the spread is still most likely expected to remain positive. Similarly, even if deposit betas reach 100%, plenty of deposits are non-interest bearing. When you combine that some growth in loan portfolios and continued expense discipline, the group should have sustainable earnings growth in the high single-digits pace, beyond the current unsustainable tax-cut induced windfall.

The chart below shows the Finance sector’s Q3 earnings and revenue growth expectations in the context of where growth has been over the last two quarters and what is expected in the coming three periods. 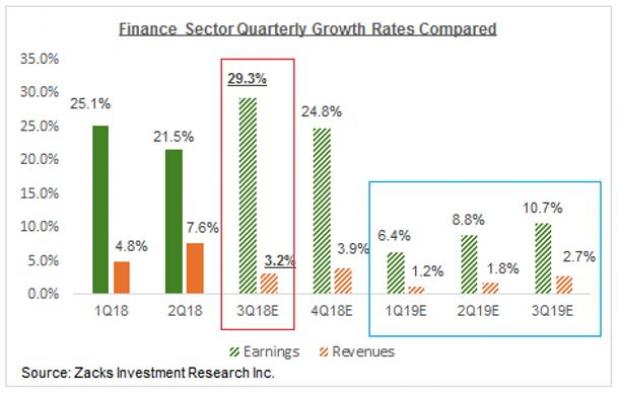 The contrast between revenue growth and earnings growth this year speaks to the direct impact of tax cuts on bank earnings. But as you can see, the growth pace comes down to normal levels from next year onwards.

Total Q3 earnings are expected to be up +17.8% from the same period last year on +7.1% higher revenues, with double-digit earnings growth for 10 of the 16 Zacks sectors.

As pointed out earlier, estimates for the quarter came down, as the chart below shows. 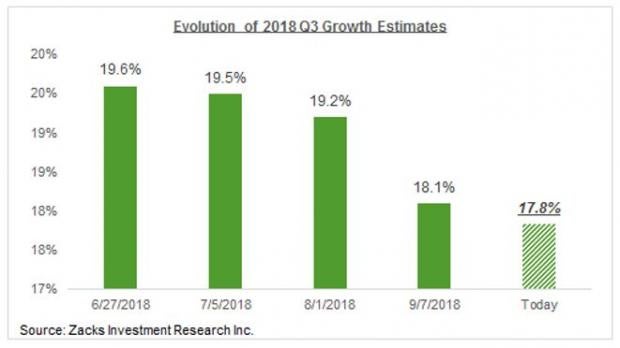 With the outlook for the global economy starting to weaken and companies starting to feel the pinch of cyclical cost inflation, this negative revisions trend will likely only accelerate going forward. There is also the issue of trade protectionism having a negative earnings impact. This hasn’t shown up in estimates yet, but we can easily see the negative earnings impact of trade protectionism in terms of higher expenses resulting from supply-chain disruptions and competitive forces prompting companies to absorb the increased costs instead of passing them onto end consumers.

Overall growth reached its highest level in almost 8 years in each of the last two quarters, with the growth pace starting to decelerate in the second half of the year and into next year, as you can see in the year-over-year quarterly earnings growth chart for the S&P 500 index below. 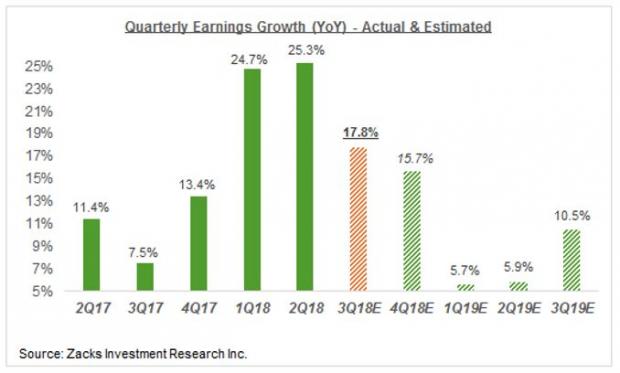 If we look at earnings growth for the S&P 500 index on a rolling 4-quarter basis, to smooth out the quarter-to-quarter variation, then the growth acceleration trend remains in place through Q4 2018 before starting to trend down next year, as the chart below shows. 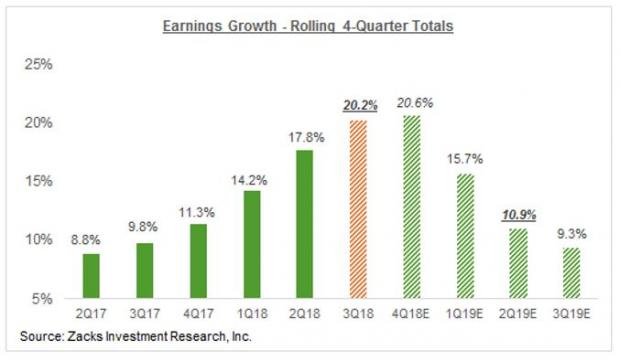 We don’t get into the thick of the Q3 earnings season till the following week, but the reporting cycle has gotten underway already, with results from 21 S&P 500 members out and another 9 index members on deck to report this week. All of these early reporters have fiscal quarters ending in August, but they get counted as part of the September-quarter tally.

Total earnings for these 21 index members are up +23.4% from the same period last year on +9.3% higher revenues, with 85.7% beating EPS estimates and 71.4% beating revenue estimates.

It is still too small a sample of results to draw any firm conclusions from, but the results at this early stage are on the weaker side relative to other recent periods, as the comparison charts below show.

For more details about the overall earnings picture and the Q3 earnings season, please check our weekly Earnings Trends report.