The Zacks Aerospace-Defense industry is housed within the broader Zacks Aerospace sector. It carries a Zacks Industry Rank #75, which places it in the top 30% of more than 250 Zacks industries.

The industry’s position in the top 50% of the Zacks-ranked industries is due to a positive earnings outlook for the constituent companies in aggregate. Looking at the aggregate earnings estimate revisions, it appears that analysts have gained confidence in this group’s earnings growth potential in the past few months. Evidently, the industry’s earnings estimates for the current fiscal year have gone up 3.5% since September 2018. 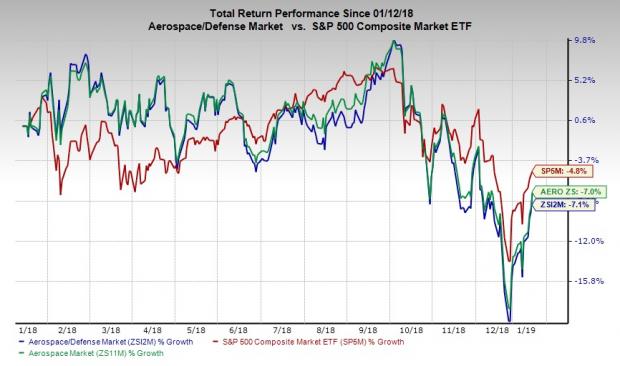 On the basis of trailing 12-month EV/Sales ratio, which is used for valuing capital intensive stocks like aerospace-defense, the industry is currently trading at 1.49 compared with the S&P 500’s 2.73 and the sector’s 1.34.

Macroeconomic statistics like the nation’s declining unemployment rate as well as improving GDP growth are boosting growth prospects. Naturally, these have set the stage for more upside in the aerospace-defense industry, since a strong economy can better support defense funding. On the commercial front, demand for new jets is expected to increase as a big fleet of old airplanes are set to retire in the next couple of years.

However skilled labor shortage in the U.S. aerospace-defense industry remains a cause of concern. Nevertheless, to address this issue, in July 2018, a handful of major U.S. aerospace and defense contractors like Boeing, General Dynamics and Huntington Ingalls (HII - Free Report) pledged to enhance employment opportunities in the industry.

Given the industry’s favorable rank and earnings expectations, investors may bet on a few stocks in this space that exhibit a strong earnings outlook.

We are presenting four aerospace-defense stocks with a Zacks Rank #1 (Strong Buy) or #2 (Buy) that investors may want to add to their portfolio. You can see the complete list of today’s Zacks #1 Rank stocks here.

Lockheed Martin Corp. (LMT - Free Report) : For this Bethesda, MD-based company, the Zacks Consensus Estimate for 2019 EPS indicates year-over-year improvement of 11.3%. It came up with average positive surprise of 13.92% in the trailing four quarters. It sports a Zacks Rank #1.

Northrop Grumman Corp. (NOC - Free Report) : For this Falls Church, VA-based company, the Zacks Consensus Estimate for 2019 EPS has risen 13% in past 90 days. It came up with average positive surprise of 17.87% in the trailing four quarters. It carries a Zacks Rank #2.

The Boeing Co. (BA - Free Report) : For this Chicago, IL-based company, the Zacks Consensus Estimate for 2019 EPS indicates year-over-year improvement of 21.1%. It came up with average positive surprise of 28.01% in the trailing four quarters. It holds a Zacks Rank #2.

Engility Holdings EGL: For this Chantilly, VA-based company, the Zacks Consensus Estimate for current-year EPS indicates year-over-year improvement of 5.1%. It came up with average positive surprise of 19.9% in the trailing four quarters. It carries a Zacks Rank #2.