Bull of the Day: Unilever (UL)

It’s feeling a little uncertain in the markets again these days. President Trump and Fed Chairman Powell seem to be on the same page and in the most recent meeting, the Fed chose to leave short-term rates unchanged and also hinted that they had almost no appetite for any raises in the near future.

Powell pointed to the lingering effects of the trade war, slowing growth in Europe and China and an end to the natural stimulus of the 2017 tax cuts.

The Central Bank also lowered 2019 GDP growth estimates from 2.3% to 2.1% that's pretty significantly at odds with the 3.2% expected from the White House.

While the equity markets initially cheered to Fed’s actions, reality quickly sank in and industrials, materials and financials all took a hit as investors prepared themselves for a slowdown in the economy.

So maybe you're thinking about getting defensive. That doesn’t mean you turn all your holdings into cash and bury it in the backyard! It means taking the time to find the companies that provide the best shareholder value possible even while weathering changing conditions.

How about a company who’s brands are used by 2.5 billion people every day? Nutritious foods, soaps and lotions, dental care, cleaning supplies, literally everything we all use all the time. 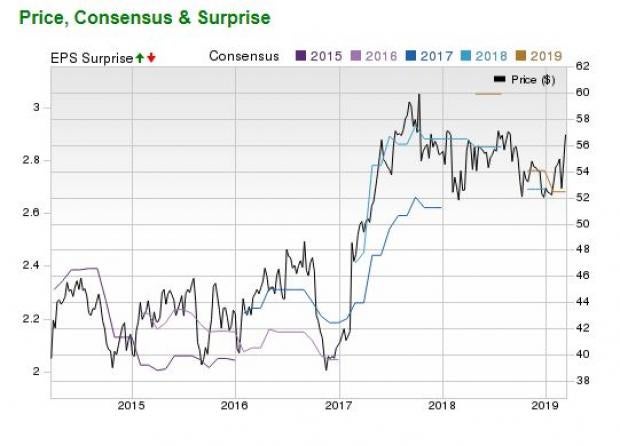 Thanks to decades of aggressive acquisition, Unilever has become totally ubiquitous on the supermarket shelves. After all, this is the company that acquired both the “Slim Fast” and “Ben and Jerry’s” brands at the same time. That’s diversification. (They’ve since reduced their stake in Slim Fast to a small minority interest.)

The company estimates that 70% of households in the world currently has at least one Unilever product in their home.

With that type of market share, Unilever could easily rest on their laurels, but instead takes the opposite approach - constantly innovating to improve their internal processes, attract and retain the best employees and provide the most attractive selection of products to their customers.

Those customers remain loyal in no small part because of Unilever’s “Sustainable Living Plan,” which the company describes as the “recognition that growth at the expense of people or the environment is both unacceptable and commercially unsustainable.”

Their stated commitment is to:

There’s more “feel good” stuff that we could talk about, but let’s make sure we also feel good about the financials.

Even during a year in 2018 that challenged many global corporations with currency fluctuations, commodity price uncertainty and general consumer discomfort.

While we fretted about trade wars, Brexit and other geopolitical uncertainty, Unilever grew sales by 3.1%, improved operation margin 90bps to 18.4% and turned in healthy free cash flow of €5 billion.

Though price and volume growth was fairly evenly distributed across the company, the company reported that they “saw the brands with the most distinct and well-articulated social and environmental purpose grow significantly faster than out other brands.”

We’re expecting earnings growth of 2.87% in the current year and 3.16% next year, and the Zacks Rank #1 (Strong Buy) stock also pays a 3% annual dividend yield.

Even in a defensive sector, Unilever stands out. Just take a look at how it performed compared to the Consumer Staples Sector and the S&P 500 at the end of 2018 when things looked the darkest. In uncertain conditions, it’s literally the best of the best.

So if slowing economic forecasts and inverted yield curves have you feeling uneasy, Unilever could be just the thing that helps you sleep a little better at night.

Note: There's one last piece of business that you need to know. Unilever is technically a combination of two separate holding companies which are registered in different jurisdictions and listed on different exchanges. That's why you’ll sometimes see it referred to as “Unilever PLC” and sometimes “Unilever NV.”

For all practical purposes, however, there’s no difference to investors. An “Equalization Agreement” assures that shareholders of both entities receive the same board representation and are paid the same dividend.

Breakout Biotech Stocks with Triple-Digit Profit Potential The biotech sector is projected to surge beyond $775 billion by 2024 as scientists develop treatments for thousands of diseases. They’re also finding ways to edit the human genome to literally erase our vulnerability to these diseases. Zacks has just released Century of Biology: 7 Biotech Stocks to Buy Right Now to help investors profit from 7 stocks poised for outperformance. Our recent biotech recommendations have produced gains of +98%, +119% and +164% in as little as 1 month. The stocks in this report could perform even better. See these 7 breakthrough stocks now>>

Bull of the Day: Ametek (AME)