Airlines are notoriously tough to value. It can be a great business, but it’s extremely economically sensitive. Airlines have huge fixed costs and revenues and variable costs are highly variable and often totally out of their control.

Airline earnings performance tends to follow the general economy – when consumers have discretionary income, they tend to fly more and pay more per seat – but even those prices can fluctuate during destructive price wars.

Fuel costs are a major factor in profitability and when the price of oil rises, airline operating expenses tend to rise as well. The airlines have to operate each scheduled flight, regardless of how many of the seats were sold – and regardless of how much expensive fuel they’re about to burn.

A code sharing agreement involves the process by which one airline publishes and sells a flight under its own designator and flight code, but contracts with another carrier to provide the aircraft, flight and ground crews and other administrative services.

These agreements allow the big airlines more flexibility, especially in serving smaller markets or offering connections to out of the way locations. It also reduces redundancy in the industry as a whole as passengers who have booked their flight through two different carriers might be on the same actual flight, instead of two half-full airplanes simultaneously flying the same route.

As the largest regional carrier in the US, SkyWest operates more than 2,300 flights per day to more than 250 cities in the US, Canada and Mexico and carries almost 40 million passengers per year.

SkyWest operates a total of 482 relatively small jets with between 50 and 76 seats from two manufacturers – Bombardier and Embraer. They do not fly the Boeing 737 MAX that has been plagued by recent technical difficulties, causing flight cancellations at other carriers.

SkyWest’s flights are spilt primarily between express service between adjacent big cities like Los Angeles and San Francisco, and connections to smaller markets like Boise and Palm Springs. With 482 planes flying 2,300 times a day, the average SkyWest aircraft takes off and lands an average of almost 5 times a day.

Over 90% of SkyWest’s contracted flights are “fixed-fee,” meaning that they are paid the same rate by the ticket-selling carrier, regardless of the number of seats that are actually filled. This greatly reduces the variability in revenues and costs that plague larger airlines.

That consistency is evident in SkyWest’s earnings, with net earnings continuing to increase even when revenues fluctuate. A superior cost structure when compared to other airlines allows SkyWest to improve margins and deliver to the bottom line.

Note that in the Zacks Consensus estimates, although sales are expected to soften over the year-ago period, estimates for net earnings continue to rise. Recent upward revisions make SkyWest a Zacks Rank #1 (Strong Buy). 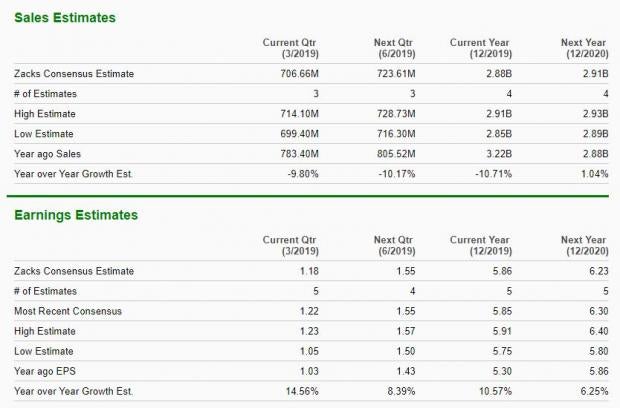 Despite its potential for steadier performance, SkyWest is also attractively valued relative to airline peers, currently trading at a forward P/E ratio of 10X versus an industry average of 11.2X.

Note also that in the Price, Consensus and Surprise chart below that after a multi-year rally based on 18 consecutive positive surprises, SkyWest took a big hit at the end of 2018 based on fears of an economic slowdown that never materialized. Though the broad markets have now recovered those losses, SkyWest still has room to run before recovering its former highs. 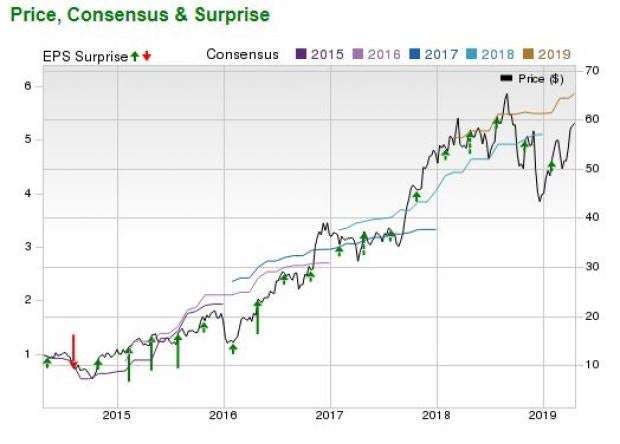 SkyWest is scheduled to report Q1 earnings after the markets close on Thursday 4/25. Expected to earn $1.18/share, recent history and favorable conditions early in 2019 would suggest we could see another positive surprise.

With a business plan that takes advantage of positive economic conditions, while sidestepping some of the pitfalls associated with the industry, SkyWest is currently the best pick in airlines.

Biggest Tech Breakthrough in a Generation Be among the early investors in the new type of device that experts say could impact society as much as the discovery of electricity. Current technology will soon be outdated and replaced by these new devices. In the process, it’s expected to create 22 million jobs and generate $12.3 trillion in activity. A select few stocks could skyrocket the most as rollout accelerates for this new tech. Early investors could see gains similar to buying Microsoft in the 1990s. Zacks’ just-released special report reveals 7 stocks to watch. The report is only available for a limited time. See 7 breakthrough stocks now>>