Bear of the Day: Tesla (TSLA)

Read MoreHide Full Article
On April 1, I chose Tesla (TSLA - Free Report) as the Bear of the Day and it was no joke. Earnings estimates had started to soften again and with the company facing big challenges for production, sales, and profitability, all eyes were on Elon Musk battling with the SEC and the stock price struggling to get back above $290.
Here's one paragraph I wrote that captures the beginning of cracks in the dam...
You can see above that in the past 60 days (the key window for the Zacks Rank calculation), the majority of 8 covering analysts for who we have EPS revisions have all lowered their profit estimates to drive the consensus down from $6.42 to $6.14 for the current year. Now that's only a 4.4% drop, so the magnitude wasn't big. But the agreement among analysts definitely was significant.
Fast forward one month -- and after the innovator's Q1 report on April 24 where they delivered less cars and a giant EPS miss -- and estimates have plummeted from a projected profit of $6.14 to a loss of $0.98!
Even next year's EPS consensus was slashed 33% to $6.80 from $10.13. And there's no better way to visualize this reversal of fortune than with the Zacks proprietary Price & Consensus chart, which plots changes in annual earnings estimates against the stock price... 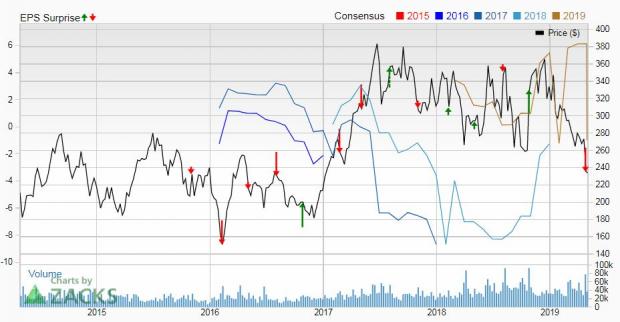 Wall Street Analyst Reaction
BofA Merrill Lynch analyst John Murphy said Tesla's "uglier than expected" Q1 operating results were largely due to weaker deliveries, lower pricing, and lighter gross margins. The analyst revised his estimates downward to be relatively consistent with the company's outlook and commentary, but keeps an Underperform rating and $225 price target on the stock.
Murphy also said he sees an earnings/cash inflection in the second half as "somewhat questionable." He believes that Elon Musk now "appears amenable" to a capital raise, quoting the CEO as having said "At this point, I do think there is some merit to raising capital." Murphy does not expect Tesla to turn the corner on free cash flow until after 2020.
Morgan Stanley analyst Adam Jonas increased his FY19 delivery forecast for Tesla by 4,000 units to 348,000 to account for the recent announcement of significantly refreshed S and X models, but noted this is still below the low end of Tesla's 360K-400K unit guidance. He also notched down his price target on Tesla shares to $230 from $240, maintaining a $185 per share value for the company's core auto business but lowering his view of the value of Tesla's autonomous assets, or its Mobility unit, to $45 from $55 per share.
While the company recently showed off autonomous technology that was "extremely impressive," Jonas thinks full-self-driving technology will undergo a far slower adoption ramp than the company anticipates and he also doesn't believe fully automated cars will be operated in a private-ownership model as Tesla has envisioned.
Finally, writing for TheFly.com on April 25, Jessica de Sa-Mota put together an excellent summary of the view of one big TSLA bull who was giving up...
Long-term bull cuts Tesla rating as profitability will not 'magically return'
Calling himself a "long-term bull on the Tesla story," Wedbush's Ives said he was "throwing in the white towel" and downgrading the stock to Neutral from Outperform as the demand story is quickly changing and the company has "unfortunately not adjusted to an evolving EV landscape." The analyst told investors that he views this quarter as "one of the top debacles" he has ever seen, while "Musk & Co. -- in an episode out of the Twilight Zone -- act as if demand and profitability will magically return to the Tesla story."
Ultimately, Ives believes the company's guidance is aggressive and management and the board are not taking aggressive enough cost cutting actions and shutting down future endeavors to preserve capital and give a sustained path to profitability for the Street.
Further, the analyst continues to feel robotaxis, insurance products, and other endeavors are "distractions from the growing demand woes" that are not being addressed. At this point "the writing is on the wall" that Tesla will likely have to raise $3B-plus of capital in the near-term to sustain its capex and debt needs given its current profitability path, he contended. The analyst lowered his price target on the shares to $275 from $365 to reflect his reduced numbers for the coming years and his loss of confidence in the story.
(end of excerpt from TheFly.com)
Energy Innovator, or Debt Hog?
Tesla may still fulfill the lofty visions of its founder and devoted investors as soon as next year. I certainly wouldn't bet too heavily against Musk with TSLA shares at $250. But until we have more visibility about the business, we may do well to take it a quarter at a time.
And since the company and the analysts got this past quarter so wrong, investors should stay cautious. The Zacks Rank gave us the early stages of a warning in March when shares were trading just below $290. It's telling us to remain on the sidelines now.
As I explained in last month's piece...
The battle lines over the future of Tesla are fought daily among traders, institutional investors, and investment bank analysts.
The spectrum of views run from "the most revolutionary energy company ever" to an unsustainable dream built on cheap, and soon to be crushing, debt loads.
I'm not here to take a side in this war of words and wealth today, but to share the single metric that has recently made TSLA a Zacks #5 Rank Strong Sell.
That metric is the momentum of earnings estimate revisions by Wall Street analysts. Every day, Zacks collects the latest changes up or down in analyst profit projections and funnels them into an algorithm that weights the magnitude and agreement of the revisions.
So we not only produce a consensus EPS estimate (that is also weighted by the most accurate analysts and most recent revisions), but we also pit over 4,000 stocks against each other to determine the relative strength and direction of those revisions.
Traders can have any fundamental or technical view they wish about TSLA shares, but they will always do better by adding a consistent and unemotional quantitative metric used by institutional investors around the globe. The ranking of stocks by earnings estimate revisions produces a key relative strength metric -- the Zacks Rank -- that gets you on the right side of short-term EPS momentum, up or down.
Zacks' Top 10 Stocks for 2019
In addition to the stocks discussed above, would you like to know about our 10 finest buy-and-holds for the year?
Who wouldn't? Our annual Top 10s have beaten the market with amazing regularity. In 2018, while the market dropped -5.2%, the portfolio scored well into double-digits overall with individual stocks rising as high as +61.5%. And from 2012-2017, while the market boomed +126.3, Zacks' Top 10s reached an even more sensational +181.9%.
See Latest Stocks Today >> 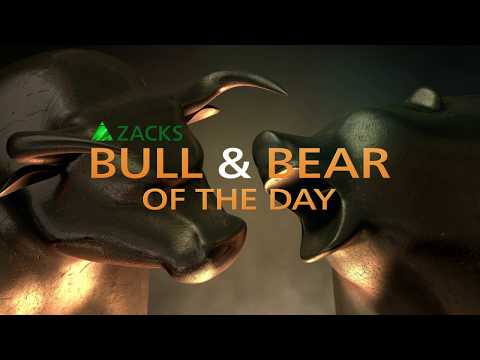