The Boston Beer Company (SAM - Free Report) posted stronger-than-projected second-quarter financial results last week, even as the larger beer industry grapples with changing consumer habits. Despite slowing beer sales in the broader market, SAM shares have soared nearly 60% in 2019 to blow away the S&P 500 and its industry.

Boston Beer last Thursday posted revenue of $318.4 million, which marked a $45.3 million or 16.6% climb from the year-ago period. The firm pointed to continued strength from its Truly Hard Seltzer brand, along with Twisted Tea as big reasons for its sales growth as its flagship Samuel Adams sales slow. “Our depletions growth in the second quarter was a result of increases in our Truly Hard Seltzer and Twisted Tea brands that were only partially offset by decreases in our Samuel Adams and Angry Orchard brands,” the company wrote in prepared remarks.

“Truly continues to grow beyond our expectations. We are launching Truly draft nationally this quarter while we continue to expand distribution across all channels.”

The firm launched Truly in April 2016. This helped Boston Beer grab market share and build brand awareness relatively early on in the quickly the growing hard seltzer market. And the category hardly seems like a fad.

In fact, UBS analyst Sean King predicts the category can jump from $550 million at the moment to $2.5 billion by 2021, which implies an annual growth rate of 66%. Plus, hard seltzer sales already surged 193% in the 52-week period that ended on April 20, according to Nielsen.

Along with Truly’s success, Boston Beer officially closed its $300 million merger with Dogfish Head Craft Brewery on July 3. We can also see that SAM stock has roared back recently after an extended downturn.

Boston Beer shares have skyrocketed 145% in the past two years to crush its industry's roughly 9% average decline. SAM stock is also up 40% in the past 12 months, while the alcoholic beverages market dipped 4.5%. 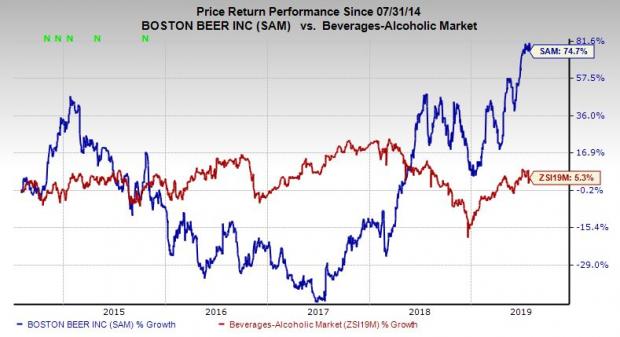 Shipments and depletions don’t exactly equal revenue-generating sales. With this in mind, our current Zacks Consensus Estimate calls for Boston Beer’s fiscal 2019 revenue to jump 11.7% to reach $1.13 billion. Looking further down the road, SAM’s fiscal 2020 revenue is projected to climb nearly 9% higher than our current-year estimate to reach $1.23 billion.

At the bottom end of the income statement, Boston Beer’s adjusted full-year 2019 EPS figure is projected to surge 17.5% to $8.78 per share. In a sign of sustained expansion, the firm’s 2020 earnings are expected to climb roughly 13% above our 2019 projection.

Investors will also see that SAM’s earnings estimate revision activity has boosted its fiscal 2019 and 2020 outlook recently. Boston Beer has also topped our quarterly earnings estimates by an average of 35% over the trailing four periods. 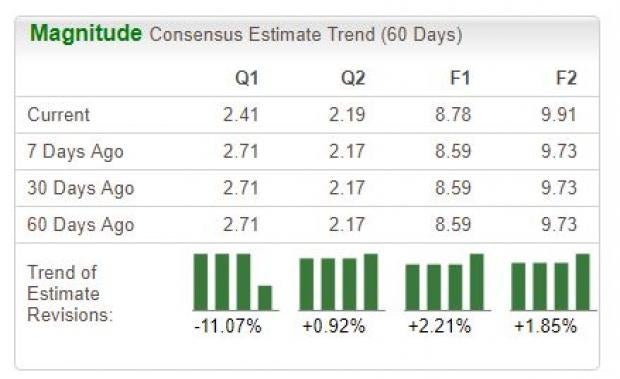 Boston Beer has clearly positioned itself for future growth as consumers change their drinking habits. SAM is currently a Zacks Rank #1 (Strong Buy) stock that sports an “A” grade for Growth and a “B” for Momentum in our Style Scores system.