The Zacks Domestic Auto industry incorporates companies that are engaged in designing, manufacturing and retailing of vehicles across the globe. The vehicles include passenger cars, crossover vehicles, sport utility vehicles (SUVs), trucks, vans, motorcycles and electric vehicles (EVs). Importantly, the industry creates a large number of job opportunities. Also, the industry is at the forefront of innovation, courtesy of its nature as well as the transformation that it is going through. Several companies have engine and transmission plants and conduct research and development (R&D) and testing.

•    The auto sector is undergoing radical changes. There has been a sharp decline in demand for sedans and hatchbacks while demand for crossovers, SUVs and pick-up trucks has skyrocketed. This discernible shift in consumers’ preference has prompted automakers to alter their production strategies in favor of spacious and more comfortable vehicles.

•    The auto industry has witnessed a noticeable increase in mobility and ride-hailing services. As the future of the industry is extremely uncertain, automakers are going all out to enhance the new capabilities and opting for acquisitions.

•    The problem of safety still haunts automakers. In recent times, there have been a large number of recalls. This has not only marred automakers’ image but also put lives under threat.

The Zacks Domestic Auto industry is a seven-stock group within the broader Zacks Auto sector. The industry currently carries a Zacks Industry Rank #219, which places it in the bottom 14% of more than 250 Zacks industries.

The industry’s positioning in the bottom 50% of the Zacks-ranked industries is a result of negative earnings outlook for the constituent companies in aggregate. Over the past year, the industry’s earnings estimate for the current year has declined 1.1%.

Before we present a few domestic auto stocks that you may want to consider for your portfolio, let’s take a look at the industry’s recent stock-market performance and valuation picture.

The Domestic Auto industry has outperformed its own sector over the past year but underperformed the Zacks S&P 500 composite over the same time frame.

Over this period, the industry has declined 6.8% compared with the sector’s decline of 14.1%. The Zacks S&P 500 composite however has gained 3.9% in the same time frame. 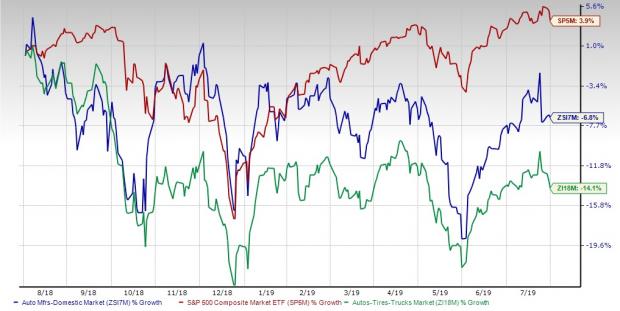 On the basis of trailing 12-month enterprise value-to EBITDA (EV/EBITDA), which is a commonly used multiple for valuing auto stocks, the industry is currently trading at 12.86X compared with the S&P 500’s 11.46X. It is above the sector’s trailing-12-month EV/EBITDA of 9.19X.

The near-term prospects of the domestic auto industry do not appear to be much encouraging. The uncertainties surrounding autonomous and electric future and need for rapid adjustments due to shifting demand have added to automakers’ woes.

Fox Factory Holding: The Zacks Consensus Estimate for current-year earnings of this Braselton, GA-based company has remained unchanged at $2.60 over the past 30 days.