The Zacks Biomedical And Genetics industry includes biopharmaceutical and biotechnology companies that develop high-profile drugs. These biologically processed drugs, targeted toward virology, neuroscience, metabolism and rare diseases, are manufactured using live organisms. The main goal of biotech companies is to use technology to create breakthrough drugs. Given the dynamic and evolving nature of technology, the space is riskier than the more stable large-cap pharma or drug industry.

The group’s Zacks Industry Rank is basically the average of the Zacks Rank of all the member stocks.

The Zacks Biomedical and Genetics industry currently carries a Zacks Industry Rank #83, which places it in the top 33% of more than 255 Zacks industries. Our research shows that the top 50% of the Zacks-ranked industries outperforms the bottom 50% by a factor of more than 2 to 1.

Before we present a few biotech stocks that are well positioned to outperform the market based on a strong earnings outlook, let’s take a look at the industry’s stock-market performance and current valuation.

The Zacks Biomedical and Genetics Industry, which is a 312-stock group within the broader Zacks Medical Sector, has underperformed both the S&P 500 and the sector it belongs to on a year-to-date basis.

While the stocks in this industry have collectively declined 2.1%, the Zacks S&P 500 composite and the Zacks Medical sector have risen 13.6% and 0.8%, respectively. The magnitude of decline in bigger companies has more than offset gains recorded by the small biotechnology companies.

Since most companies in the biotech sector do not have approved drugs, valuing them becomes complex. On the basis of forward twelve months price-to-sales ratio (P/S F12M), which is commonly used for valuing biotech companies with approved drugs, the industry is currently trading at 2.50 compared with the S&P 500’s 3.09 and the Zacks Medical sector's 2.56.

The biotech industry is continuously evolving and is largely volatile. It has been in the spotlight in recent times as a slowdown in mature products of most pharma bigwigs has forced them to target smaller entities with impressive pipelines. This, in turn, has driven the share price of small biotech stocks, which are well-equipped with path-breaking technology. We expect the momentum to continue in the near term as well.

The industry currently has quite a few stocks, which sport either a Zacks Rank #1 (Strong Buy) or 2 (Buy). Here, we list a few such stocks that have also been witnessing positive earnings estimate revisions.

Amgen is one of the leading biotech companies of the world. The Zacks Consensus Estimate for current-year EPS has been revised 2.2% upward over the past 60 days. Amgen carries a Zacks Rank #2. The stock has gained 5.7% so far this year. 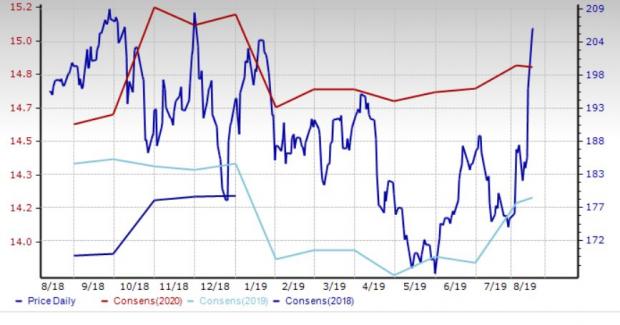 New Haven, CT based biopharmaceutical company Alexion Pharmaceuticals (ALXN - Free Report) has seen an 11.6% increase in its share price this year so far.  The Zacks Consensus Estimate for this Zacks #2 Ranked player’s current-year EPS has risen 4.2% over the past 30 days.

Cambridge, MA, based Biogen (BIIB - Free Report) is one of the leading biotech companies in the world. The consensus estimate for this Zacks #2 Ranked player’s current-year EPS has risen 8% over the past 60 days. However, the stock has lost 23.3% this year so far.