Netflix (NFLX - Free Report) shares are down more than 20% since reporting disappointing subscriber growth in the second quarter and also amid the imminent entry into the streaming market of competing services from Disney (DIS - Free Report) , Apple (AAPL - Free Report) , HBO and others. 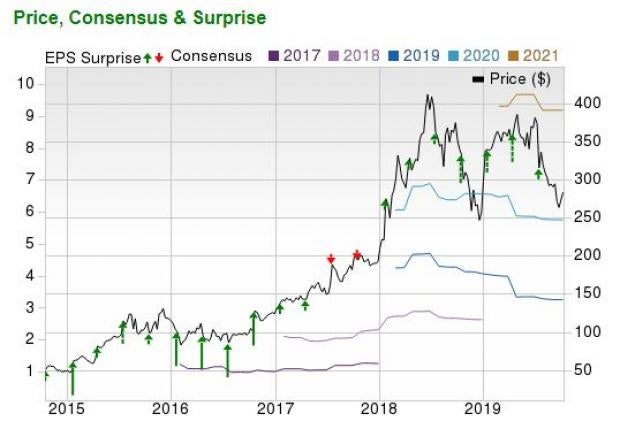 When Netflix reports Q3 results on Wednesday afternoon, all eyes will be on the net paid subscriber figure - which the company has predicted will grow by 7 million new customers.

Analysts are somewhat less optimistic, reducing predictions recently to as low as 6.5 million.
Netflix had a big content winner during the quarter with the release of the third season of the wildly popular original show “Stranger Things,” but it remains to be seen how much that popularity translated to new paid subscriptions.

Netflix has spent mightily on developing new content that will keep existing subscribers tuning in and attract new ones, but they may be facing an uphill battle against Disney and their Disney+ streaming service. Disney already owns a massive amount of its own original content and has been making moves over the past year to make sure most of its movies, shows and sports will be available only on its own platform.

Apple’s new streaming service will have only a limited amount of content at first and will be offered free to purchasers of new Apple devices, but the company’s huge pile of cash on the balance sheet means they could easily ramp up the purchase and/or production of additional content at will.

The Zacks Consensus estimates call for Netflix to report net earnings of $1.05/share on revenues of $5.25 billion. The simplicity of the company’s core business makes revenue and earnings forecasts fairly simple. Armed with the paid subscribers figure, analysts can multiply by the subscription fees, subtract the cost of content (and other less significant costs) and generally arrive at fairly accurate estimates.

Netflix management argues that the subscriber numbers are subject to significant fluctuations and that investors should be able to look past any given quarter and pay attention to longer-term trends. Since they’ve been reporting net subscriber figures, they’ve never missed the estimates two quarters in a row.

Wednesday night figures to be one of Netflix’s most important reports ever. Beating the estimates would go a long way toward reassuring investors that the original streaming giant is still well ahead of the formidable competition that is about to arrive. Any significant misses will bolster the position of short-sellers - who’s position now exceeds $6 billion in notional value.