Applied Materials (AMAT - Free Report) posted stronger-than-projected earnings and revenue results on November 14. Shares of AMAT were already up roughly 70% in 2019 prior to its post-earnings surge, as part of a larger semiconductor industry comeback.

Applied Materials is a semiconductor equipment firm that has been on a tear in 2019 despite the fact that its sales and earnings fell for four straight periods. The company with a $55 billion market cap is a leader in “materials engineering solutions” that are used to make “virtually every new chip and advanced display in the world.” AMAT’s recently-reported Q4 sales fell 13%, while its adjusted earnings dipped nearly 6%.

The Santa Clara, California-headquartered firm is, of course, not alone in the notoriously cyclical semiconductor and chip industry. Big-names such as Nvidia (NVDA - Free Report) also posted four straight periods of declining revenues. But this is not totally unusual for chip firms, especially when they come up against hard-to-compare periods of outsized success.

Luckily, Applied Materials and others such as industry giant Intel (INTC - Free Report) impressed Wall Street with their guidance. And the reason is relatively simple: everyone from Apple (AAPL - Free Report) to Microsoft (MSFT - Free Report) rely on semiconductors and they will remain essential backbones of the technological revolution for years to come.

“The semiconductor industry is increasingly adopting a new playbook for improving chip performance, power, area and cost, and we are investing in unique solutions to enable our customers’ success in the AI-Big Data era.” 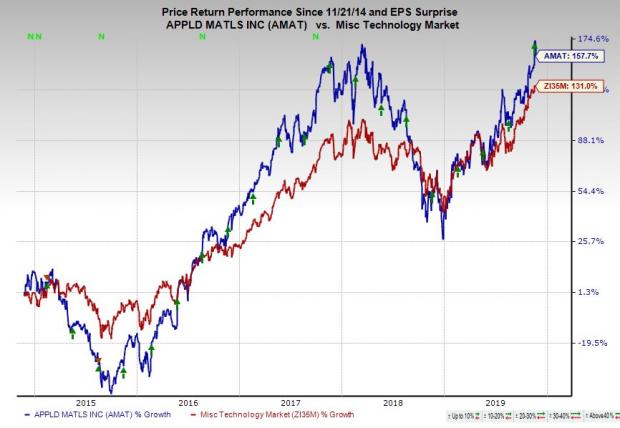 As we alluded to at the outset, the chip equipment maker’s shares have soared roughly 80% in 2019. This crushes the S&P 500’s 23% climb and its industry’s 53%. AMAT stock also popped right after its Q4 report but has pulled back slightly since then.

Applied Materials stock closed regular trading Wednesday at $59.65 per share, down just a few dollars from its new highs. Investors will notice in the chart above that AMAT shares have now climbed ahead of their early 2018 highs.

Along with its industry-topping run of 160% in the last five years, Applied Materials is a dividend payer. The firm currently pays an annualized dividend of $0.84 per share, for a yield of 1.4%. This comes in below the 10-year U.S. Treasury’s 1.74% and semiconductor equipment peer Lam Research’s (LRCX - Free Report) 1.7%. But AMAT’s yield helps it stand out against the likes of Micron (MU - Free Report) and Advanced Micro Devices (AMD - Free Report) , who don’t pay a dividend at all.

The company also repurchased 60 million shares of common stock in fiscal 2019. Meanwhile, AMAT is trading at 18.1X forward 12-month Zacks earnings estimates. This comes in below its industry’s 21.1X average—as it has for much of the past five years—and its own five-year high of 19.2X.

Applied Materials is also part of our Semiconductor Equipment - Wafer Fabrication industry that rests in the top 1% of our more than 250 Zacks industries at the moment.

Applied Materials’ consensus earnings estimates have surged since it posted its Q4 results, with its Q1 EPS estimate up 24%—$0.92 vs. $0.72. The chart above helps investors see just how much stronger things look on the earnings front as a whole. This positivity helps AMAT earn a Zacks Rank #1 (Strong Buy) right now, along with an “A” grade for Momentum in our Style Scores system.

AMAT clearly looks to be a stock that investors might want to consider as a 2020 semiconductor industry comeback appears to be on the horizon. 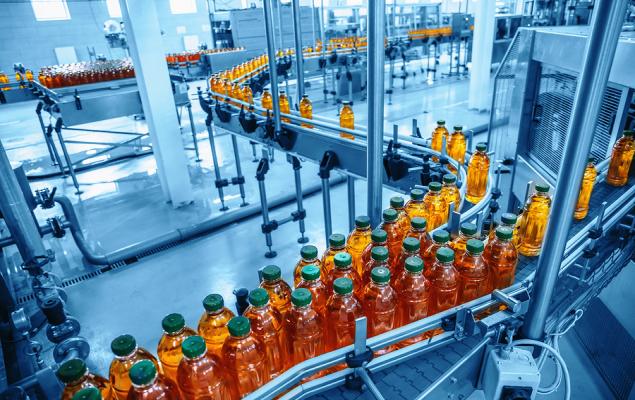