Shares of Warrior Met Coal Inc. (HCC - Free Report) have plummeted over 20% in 2019 as part of a larger downturn in the coal industry. Warrior isn’t exposed to the decline in coal used for electricity, but the steel industry that HCC serves has faced hard times as well.

Warrior Met Coal, as its name and ticker might suggest, produces and exports metallurgical or met coal that is used in the steel making process. Warrior mines its premium hard coking coal in the U.S. and sells it to steel producers across Europe, South America, and Asia.

Meanwhile, more than a half dozen large U.S. coal companies have filed for bankruptcy over the last year, according to an October Wall Street Journal report. The downturn comes as U.S. natural gas production continues to soar and renewable energy from hydropower to wind becomes more popular. In fact, coal-based electricity is expected to power just 25% of the U.S. grid in 2019, down from 48% in 2008, according to the U.S. Energy Information Administration.

Warrior Met Coal, as we mentioned, does not really care about coal’s fall from grace when it comes to U.S. electricity. But the company has been impacted by the overall negativity, which is hard to escape. The coal industry that HCC is a part of currently rests in the bottom 8% of more than 250 Zacks Industries. 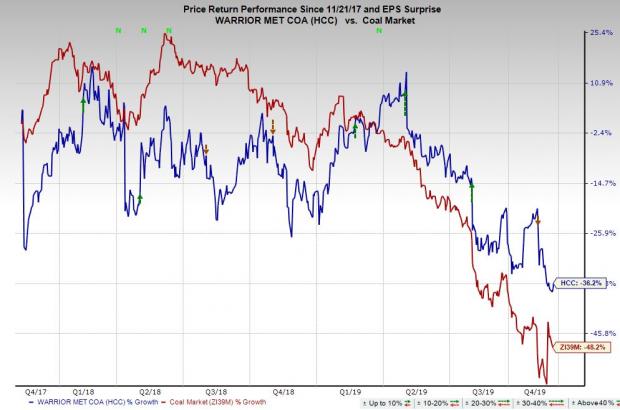 Despite steel industry woes, which include tariffs, the Brookwood, Alabama-headquartered firm’s Q3 fiscal 2019 revenue did jump over 5% from the year-ago period. And Warrior’s revenues were up around 4.5% through the first nine months of the year.

However, the firm’s costs climbed and its adjusted quarterly earnings tumbled roughly 25%. The company also fell short of our quarterly earnings estimates on October 30. “Even with the seasonal steel slowdown in the third quarter, as well as additional macro issues in the global economy significantly impacting pricing we were still able to execute another quarter of strong sales volume along with a significant increase in production volume,” CEO Walt Scheller said in prepared remarks.

Moving on, our current Zacks Consensus Estimates call for Warrior’s fourth quarter revenue to tumble over 41% from the year-ago period to $211.6 million. This is expected to pull the firm’s full-year fiscal 2019 sales down by 8.3%. Peeking ahead, HCC’s fiscal 2020 revenue is projected to tumble another 15.8%.

The bottom end of the income statement looks even worse. HCC’s adjusted Q4 earnings are projected to plummet 80%, with fiscal 2019 expected to sink 35%. Then the firm’s full-year fiscal 2020 EPS figure is projected to fall another 42%.

Investors will also see in the chart above just how much worse HCC’s consensus earnings picture has turned recently. This helps Warrior Met Coal hold a Zacks Rank #5 (Strong Sell) and a “D” grade for Momentum in our Style Scores system.