The Zacks Toys – Games – Hobbies industry currently carries a Zacks Industry Rank #77, which places it in the top 30% of 254 Zacks industries. Our research shows that the top 50% of the Zacks-ranked industries outperforms the bottom 50% by a factor of more than 2 to 1.

The Zacks Toys – Games – Hobbies industry has lagged the broader Zacks Consumer Discretionary sector as well as the S&P 500 Index over the past year. 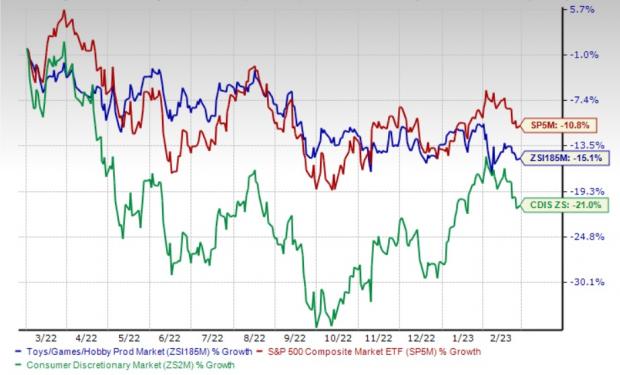 Here are a couple of stocks with a Zacks Rank #1 (Strong Buy) or 2 (Buy). You can see the complete list of today’s Zacks #1 Rank stocks here.

JAKKS Pacific sports a Zacks Rank #1. The Zacks Consensus Estimate for its current-year loss has narrowed from $1.59 to $1.47 over the past month. The company’s earnings surpassed the consensus estimate in the preceding quarter.

Investors may hold on to the following stocks for the time being, which currently carry a Zacks Rank #3 (Hold).

Mattel has an estimated long-term earnings growth rate of 9%. The company’s earnings beat estimates in the trailing four quarters, delivering an average positive earnings surprise of 102.8%. For the current year, Mattel’s earnings are expected to increase 60.5% year over year.