Don't let this shaky start to December distract you from the fact that stocks are up BIG in 2019. In fact, we just came off of several new highs for each of the major indices.

So Zacks #1 Rank Uptrends is still a good tool to watch before the Santa Claus Rally begins later this month. The screen looks for Zacks Rank #1s (Strong Buys) with upward price momentum and market-beating relative price strength that are trading in the top third of their 52-week range.

Below are three names that had passed this screen lately. See the current list by clicking here.

What do werewolves, washer machines and the chip industry all have in common?

They all run in cycles, of course!

Applied Materials (AMAT) isn’t much interested in the full moon or when to add the fabric softener.

But this global leader in semiconductor equipment sales can’t get enough of the comeback for chips this year, which has brought the Semiconductor Equipment – Wafer Fabrication space into the Top 1% of the Zacks Industry Rank (3rd spot out of more than 250).

Sales and earnings for AMAT have trended lower over the past several quarters, but its infamously cyclical space seems to be coming back around. Hopefully, its fiscal fourth quarter from last month is a sign of positive things to come in 2020.

Earnings per share of 80 cents beat the Zacks Consensus Estimate by nearly 5.3%. Net sales of $3.75 billion also topped our expectations by 1.9%.

Whether in a good part of the chip cycle or a bad one, AMAT usually finds a way to surpass quarterly earnings expectations by a few percentage points. It has surprised for 17 straight quarters now.

AMAT attributed its success to “a healthy uptick in demand for semiconductor equipment, combined with strong execution across the company”.

For all of fiscal 2019, revenue reached $14.6 billion for AMAT while adjusted earnings per share were $3.04. As with the quarterly results, these numbers are down from the previous year.

However, analysts expect earnings of $3.77 for this year, which ends in October 2020. Analysts have raised the consensus by 14.6% in the past 30 days.

Earnings are then expected to jump by that same percentage to $4.32 in the fiscal year ending October 2021. That consensus has advanced by 10.5% in the past month.

Shares of AMAT are up more than 77% in 2019 as the cycle of chips ramp up. The best part is that the company sees significant opportunities in several emerging trends, including AI, big data, cloud infrastructure and the Internet of Things, among others. 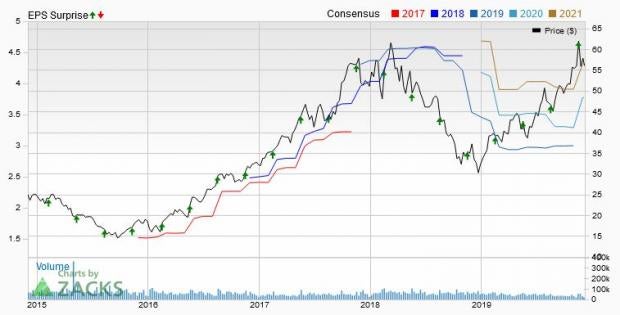 The holidays are a perfect time to get a new set of golf clubs or maybe even a state-of-the-art kayak!

The only problem is wrapping these things for under the tree. (Hint, you ain’t Santa Claus or Martha Stewart, so just get a big bow and put it in the corner.)

With 733 stores in 47 states, there’s a good chance that many consumers will be buying such items at DICK’S Sporting Goods (DKS).

In that fiscal third-quarter report from last month, DKS reported earnings per share of 52 cents that beat the Zacks Consensus Estimate by nearly 37%. It also improved 33.3% from last year.

The positive surprise was the company’s third straight, though it hasn’t actually missed since 2017. In fact, the stock has managed a double-digit average surprise of 11.5% over the past four quarters even though one of those periods was only a match.

Sales of $1.96 billion also beat our expectations at around $1.91 billion and improved 5.6% from last year.

Same-store sales rose 6% thanks to higher average ticket and transactions along with growth at hardlines, apparel and footwear, which are its three major categories.

It’s brick-and-mortar locations saw positive comps in their own right, but DKS is an omni-channel retailer. E-commerce sales increased 13%. It also accounted for 13% of total net sales, which was 1% more than last year.

Analysts liked what they saw in the quarter and raised estimates. The Zacks Consensus Estimate for this year (ending January 2020) is now $3.59, which has gained 6.2% in the past 30 days.

By the way, shares of DKS are up nearly 50% this year, which trounces the performance of the retail – misc. industry at a little more than 10%. 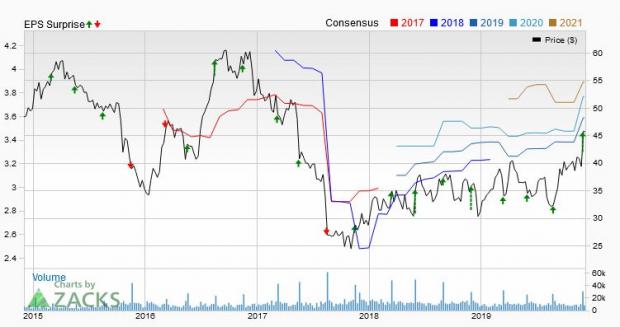 If you or someone you care about is one of the approximately 30,000 people suffering from Cystic Fibrosis (CF) in this country, then you know all about Vertex Pharmaceuticals (VRTX - Free Report) .

If you’re a biotech investor, you probably know about the company too.

In late October, the FDA approved the company’s TRIKAFTA treatment, which marked its fourth medicine approved to treat the underlying cause of CF.

VRTX cited this approval as one of the big reasons why its been having such a strong 2019, as TRIKAFTA could provide treatment for up 90% of all people with CF.

Shares of VRTX are up approximately 34% in 2019, which trounces the performance of the Medical – Biomedical & Genetics space at only about 7%. This area is in the top 23% of the Zacks Industry Rank.

In its third quarter report from late October, VRTX reported earnings per share of $1.23, which improved 13% from last year and beat the Zacks Consensus Estimate by nearly 8%.

The stock has topped expectations for 12 straight quarters and amassed an average surprise of more than 17% over the past four.

While CF makes up most of the business right now, VRTX is also looking at other areas. It is working on medicines to treat pain, alpha-1 antitrypsin deficiency, sickle cell disease, beta-thalassemia and APOL1-medicated kidney diseases.

VRTX reiterated its outlook for total revenues of CF products between $3.7 billion and $3.75 billion, which it raised to that level in October after the approval of TRIKAFTA. The drug is expected to be a big help to 2020 as well.

Over the past 60 days, the Zacks Consensus Estimate for this year has jumped 5% to $4.81 per share. 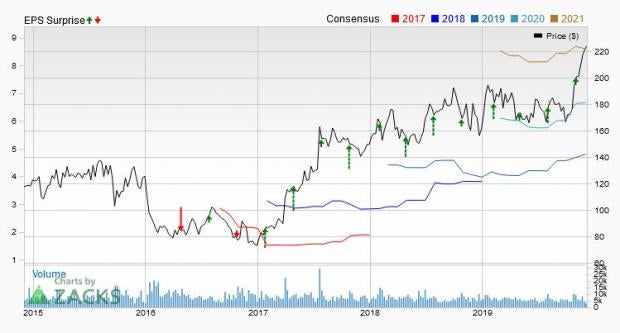