Apart from delivering a host of services for theatrical and television production for cinema exhibition, broadcast and home entertainment, the industry participants serve film studios, content creators, post-production facilities, cinema operators, broadcasters and video game designers. Some players even have significant presence in the music and image-based software markets worldwide.

•    Over the past years, shift to digital technology has met the demand for high resolution video, reduced the problems of radio frequency and electromagnetic interference, making audio visual systems more data-network friendly. Wireless transmission has enabled broadcast of audio video signals through wireless data networks in a seamless manner, while improving productivity. The industry intends to keep providing valuable services to a variety of media producers. However, the easy online accessibility of recording equipment and widespread availability of distribution channels on the Internet have significantly eroded the sector margins.

•    In the United States, smart-connected televisions, microphones and speaker enclosures are the most popular electronic devices among customers. But the U.S. manufacturers of audio and video systems continue to face severe competition from importers of comparatively low-priced devices, particularly from China, Vietnam and Mexico. Also, sharp decline of music sales has taken a toll on the industry’s prospects. Nevertheless, companies are investing in tomorrow’s technology solutions that create better communication experiences. Higher R&D expenses have, in turn, led to soft margins as the firms battle intense price wars.

•    Rapid changes due to technological obsolescence of products lead to a plethora of challenges (and opportunities), as the ecosystem continues to transform in the digital age. The fast-evolving industry has called for innovation, which necessitates the participants to continuously come up with ground-breaking technology to stay ahead of the curve. Keeping up with changing consumer and licensee demand and shifting standards render the industry vulnerable to material operating risks. As a result, most of the firms are coming up with new business model to acquire customers and scale up fast. Further, the proliferation of digital music downloads, streaming music and online piracy has negatively impacted the top line.

The Zacks Audio Video Production industry, which has 10 constituent companies, is housed within the broader Zacks Consumer Discretionary sector. It currently carries a Zacks Industry Rank #172, which places it at the bottom 31% of more than 250 Zacks industries.

The group’s Zacks Industry Rank, which is basically the average of the Zacks Rank of all the member stocks, indicates weak near-term prospects. Interestingly our research shows that the top 50% of the Zacks-ranked industries outperforms the bottom 50% by a factor of more than 2 to 1.

Now, the industry’s positioning in the bottom 50% of the Zacks-ranked industries is an outcome of negative earnings outlook for the constituent companies. Looking at the aggregate earnings estimate revisions, it appears that analysts are losing confidence in this group’s earnings growth potential.

The industry’s earnings estimates for the current year have decreased 17.4% over the past year, while the same for the next year has declined 28.8%.

Before we present a few audio video production stocks that are well positioned to outdo the market (despite broader challenges) based on their healthy earnings outlook, let’s take a look at the industry’s recent stock market performance and valuation picture.

The Zacks Audio Video Production industry has outperformed both the broader Zacks Consumer Discretionary sector and the S&P 500 composite over the past year. 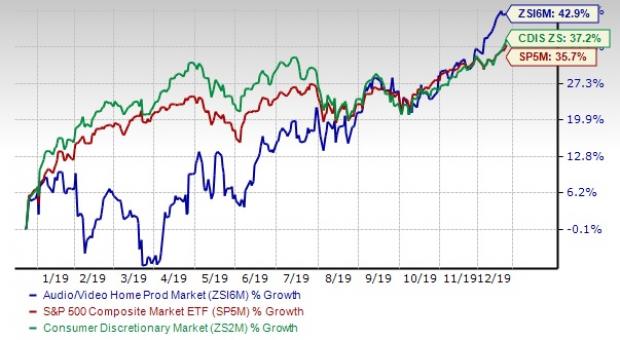 The audio-visual industry is expected to benefit from promising long-term growth drivers supported by improving macroeconomic environment, technological advances and increase in consumer spending. However, profitability of individual companies largely depends on manufacturing efficiency, and effective marketing and distribution process.

In the near future, the industry is likely to face several operational headwinds. In addition, changing consumer preferences, licensee demand, shift in industry standards and rapid obsolescence of existing products and services remain a grave concern for the ecosystem.

One of the stocks in the landscape currently sports a Zacks Rank #1 (Strong Buy). You can see the complete list of today’s Zacks #1 Rank stocks here.

Sony Corporation : Shares of this Tokyo, Japan-based audio video production firm have rallied 48% in the past year. The company has a long-term earnings growth expectation of 7.7%. The Zacks Consensus Estimate for its current-year earnings has been revised 8.6% upward over the past 60 days. The company topped earnings estimates in each of the trailing four quarters, delivering an average surprise of 86.9%. Sony has a VGM Score of B.

We are also presenting three stocks with a Zacks Rank #3 (Hold) that investors may consider betting on now, based on their compelling fundamentals.

GoPro, Inc. GPRO: The stock of this San Mateo, CA-based action video camera maker has added 8.9% in the past year. The consensus estimate for its current-year earnings has been revised 12.5% upward over the past 60 days. The company has a long-term earnings growth expectation of 10%. GoPro surpassed earnings estimates thrice in the trailing four quarters, delivering a beat of 6.3%, on average.

Dolby Laboratories, Inc. DLB: Shares of this San Francisco, CA-based audio video production firm have jumped 16.4% in the past year. The Zacks Consensus Estimate for its next-year earnings has remained stable over the past 30 days. The company has a long-term earnings growth expectation of 13%.

Panasonic Corporation PCRFY: The stock of this Kadoma, Japan-based electronic products manufacturer has added 9.6% in the past year. The consensus estimate for its current-year earnings has been revised 4.3% upward over the past 30 days. The company topped earnings estimates thrice in the trailing four quarters, delivering a beat of 21.6%, on average.