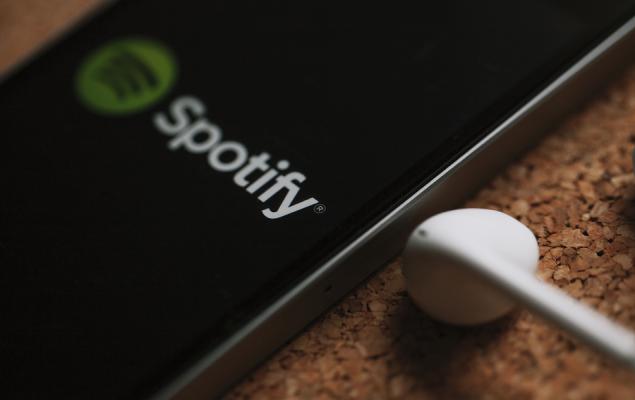 Spotify SPOT has not performed as well as initial investors expected since its direct listing in April of 2018, but it’s on its way up. SPOT has gained 24% since its strong Q3 earnings at the end of October, and I think this rally has legs. The stock is trading at the lower end of its forward P/S trend and below the broader market. I believe now is an excellent time to put a long term position on the music streaming king.

Spotify’s big bet on podcast looks like it is beginning to pay off, with 39% quarter-over-quarter growth in podcast hours streamed. This exponential growth in podcast engagement will continue to drive more conversions from ad-supported users to full paying subscribers.

The music streaming leader has been building out its podcast offering this year with three key acquisitions, to rival the podcast king, Apple. Spotify purchased Gimlet, Anchor, and Parcast in the first half of 2019 for roughly $400 million. These acquisitions not only broaden Spotify’s library of podcasts, but it also enables them to improve their original content and enables users to produce and circulate their own podcasts. Taking control of the podcast market would be a big win for Spotify as this market is expecting to be a billion-dollar global ad market in the next couple of years.

As of Spotify’s September quarter, it has 248 million active monthly users (MAUs) and 113 million paying subscribers globally. Paying subscribers bring in substantially larger margins than ad-supported users. The strategy is to initially get customers to try their platform free as an ad-supported customer, then provide the user with a product offering that drives enough engagement for the customer to see the value in purchasing the premium subscription. Spotify has been increasing its MAUs by around 30% for the past couple of years while paying subscribers make up a growing percentage of total users. The dive into podcasts should advance both metrics.

Competition in the music streaming space is steep, but Spotify’s seemingly superior product offering continues to expand its market share. The platform currently adds nearly twice as many paying subscribers every month as its biggest competitor, Apple AAPL, according to Spotify’s most recent financial report. It also drives twice as much engagement at half the churn rate (user loss). Spotify is outpacing Amazon (AMZN - Free Report) music as well, which has a user base that is skewed towards ad-supported users.

Investor’s biggest concern about SPOT is the fact that its competition is just transitioning to service-based business models and will do whatever it takes to control the spaces they are entering. Apple and Amazon both have ostensibly limitless resources. Investors wonder how a pure-play streaming service like Spotify can remain competitive.

Spotify not only has a massive consumer base already, but the company drives a cultural trend for millennials and Gen Z’s. I don’t see them deviating from this movement anytime soon. Competitors will need to take a substantial amount of market share to become leaders in the music streaming space, and at Spotify’s current customer acquisition rate, that doesn’t seem possible.

Spotify is a Swedish company that has gained enormous international traction, now operating in 79 markets. The company has a healthy balance sheet with over $2.1 billion in cash and a debt-to-capital of less than 25%. The company has been able to support growing positive free-cash-flows that will continue to provide Spotify with financial flexibility to expand its business organically and through acquisitions.

SPOT is trading 4% above where it closed its first day on the market and 24% below its all-time high. I am confident that this stock can bounce back as the digitalizing world drives more music lovers to this platform. Spotify is a leader in a growing space and continues to gain market share. Sell-side analysts are growing more confident about this stock after the latest earnings and are projecting an average target price that would represent an over 10% upside.