We now have Q4 results from 141 S&P 500 members that combined account for 36.4% of the index’s total market capitalization. Total earnings for these 141 index members are down -0.6% from the same period last year on +2.7% higher revenues, with 70.2% beating EPS estimates and 68.8% beating revenue estimates.

The two sets of comparison charts below put the results thus far in a historical context, first the growth rates for these 141 index members.

As you can see above, an above-average proportion of companies are beating revenue estimates at this stage. This has to count as a positive since estimates for the period had not come down as much as had historically been the case. The reasonableness of estimates ahead of the start of this reporting season can be gauged from the EPS beats percentage, which is tracking below historical periods. 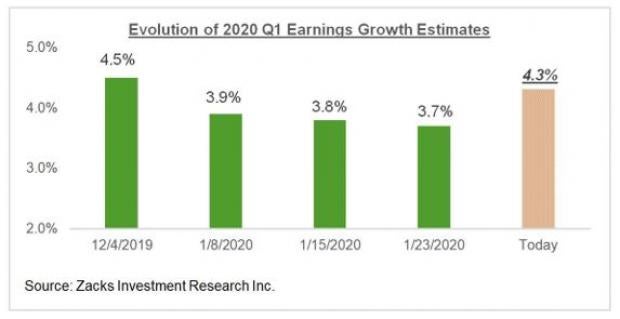 The one sector where Q4 results show a notable improvement in results and outlook is the Technology sector. Plenty of Tech sector reports are still awaited, but the start that Apple AAPL, Intel INTC and even IBM (IBM - Free Report) have given us has justifiably raised hopes.

For Q4 as a whole, combining the results that have come out with estimates for the still-to-come companies, total earnings for the S&P 500 index are currently expected to be down -2.3% on +3.9% higher revenues, with 7 of the 16 Zacks sectors expected to have lower earnings relative to the year-earlier period.

The earnings growth picture is expected to change as we turn the page on 2019 given the tough comparisons to tax-boosted earnings in 2018, with growth resuming in 2020 Q1, as the above chart shows. The chart below puts earnings and revenue growth expectations for full-year 2019 in the context of where growth has been in recent years and what is expected in the next two years. 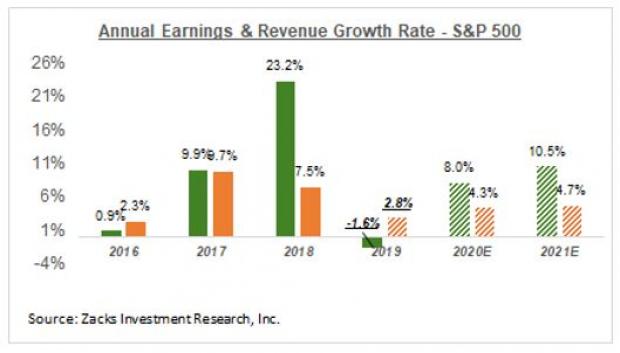