Tilly's (TLYS - Free Report) shares have plummeted over 45% in 2020, and in mid-January the apparel retailer announced sluggish holiday period sales and cut its outlook.

Tilly’s is a trendy clothing, shoes, and apparel retailer geared toward teenagers and young adults. The firm is inspired by “West Coast fashion” and competes against the likes of Urban Outfitters URBN, Zumiez ZUMZ, and American Eagle AEO.

The Irvine, California-headquartered firm had been on a solid run from late May 2019 until December. The stock began to fall around December 15 and then it tumbled after it updated its guidance on the back of rough holiday season sales on January 13.

Tilly’s said that its comparable store net sales, including e-commerce, decreased by 2.0% for the holiday period, which came against a 5.8% climb in the year-ago period. “Following a strong Black Friday weekend and Cyber Monday, our business experienced an unexpected deceleration in net sales and store traffic during the second and third weeks of December, resulting in a disappointing 2019 holiday season overall,” CEO Ed Thomas said in prepared remarks. 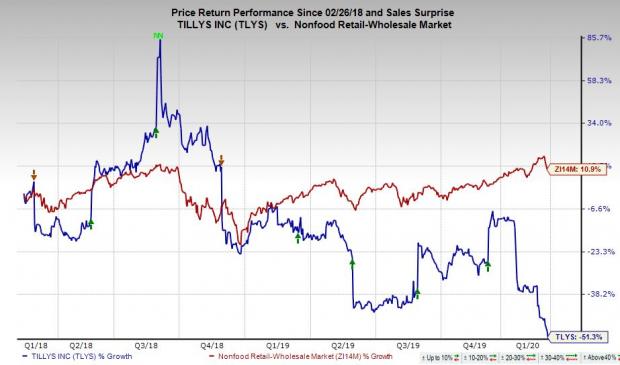 Tilly’s management said that its fourth quarter comp sales would fall between 2% and 3%, based on its tough holiday period. With this in mind, our Zacks estimates call for the company’s overall Q4 revenue to pop 1.15% from the year-ago period to $172.6 million.

At the bottom end of the income statement, the company’s adjusted earnings are projected to tumble 26% to $0.20 per share.

Investors can also see that TLYS earnings revisions activity has moved in the wrong direction for Q4, fiscal 2019, and 2020. For example, its fourth quarter consensus estimates fell from $0.30 to its current $0.20 a share in the last 60 days.

Tilly’s downward earnings estimate revisions activity helps it earn a Zacks Rank #5 (Strong Sell) at the moment. The stock is trading at under $7 per share, which might make it attractive to some investors looking for cheap stocks.

However, Tilly’s has been pretty volatile over the last several years and until it shows signs of a recovery, it is likely best to stay away from TLYS stock.