The U.S. telecom stocks witnessed a spirited rally in the past week despite geopolitical tensions triggering intense sector volatility. Washington continued to pile up pressure on Beijing through prohibitive orders as the political slugfest for 5G supremacy in the backdrop dovetailed with the administrative efforts to set guardrails and legislation to safeguard domestic interests. The Sino-American technology warfare seemed to force the industry to get polarized into two distinct halves, bringing an element of uncertainty within the telecom sector. However, this apparently did not deter the uptrend as the government urged firms to explore developing indigenous 5G solutions or depend only on “trusted vendors” for 5G deployments.

Alleging human rights abuses, the Trump administration added 11 more China-based firms to the ‘Entity List’ that restrict their access to U.S. goods and technology. The trade restrictions were based on accusations of mass detentions, forced labor and other abuses against Muslim minorities in the northwestern region of Xinjiang. The U.S. government also imposed certain sanctions against four Chinese officials on these alleged atrocities. These, in turn, are likely to have a ripple effect on the telecom industry and further strain the acrimonious Sino-American relationship.

Amid waning trusts and growing divide, the Trump administration accused two Chinese hackers of cyber espionage who were allegedly stealing sensitive data on virus research for personal profit on behalf of the communist nation. The fraying relationship took another plunge when the U.S. government ordered the shutdown of China’s Houston consulate, citing the move as a necessary step for protecting intellectual property rights and data sovereignty. This has evoked a sharp response from China and could potentially lead to a flare-up with widespread ramifications.

Amid these events, deepening trade ties with countries like India have emerged as the silver lining as more and more U.S. firms continue to invest in Indian companies. The Trump administration has also been effusive in praise of the Indian juggernaut and urged domestic entities to follow their model for inculcating homegrown technologies for deploying 5G technology, while maintaining close business relationships with a core group of trusted vendors. With expectations of another round of coronavirus-related fiscal stimulus and a favorable earnings season, the industry appeared to shake off the negative vibes from the geopolitical crisis and scripted an upward trajectory.

1.     Ericsson (ERIC - Free Report) reported impressive second-quarter 2020 results, with the top and bottom lines beating the Zacks Consensus Estimate. The Sweden-based telecom equipment maker stated that the COVID-19 pandemic had a limited impact on its operating income and cash flow in the quarter.

Apart from catering to the security demands of commercial customers, the collaboration will exclusively deliver avant-garde data and voice services to the U.K. Ministry of Defence (MOD). The deal will not only help Viasat expand its geographical footprint but also enable it to enhance its crypto-growth capabilities amid an evolving cyber threat scenario.

Enterprise customers will now have the option to deploy Nokia’s Digital Automation Cloud or customize their network with Nokia’s Modular Private Wireless. Furthermore, Nokia announced enhancements to its LTE portfolio of solutions. Importantly, LTE handles more than 85% of industrial applications.

Importantly, it will increase the data capacity of Spark’s network by up to eight times and support 5G services. With Ciena’s WaveLogic 5, advanced network automation and intelligent restoration capabilities, Spark will be able to support its 5G and IoT services. The first part of the new OTN 2 fiber network was installed between Glenfield and Papakura in Auckland. 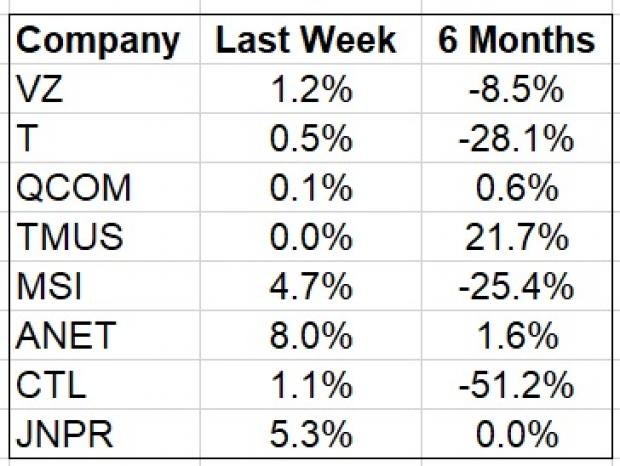 In the past five trading days, Arista Networks has been the best performer with its stock rising 8%, while none of the stocks declined.

Over the past six months, the Zacks Telecommunications Services industry declined 10.9%, while the S&P 500 recorded average loss of 0.8%. 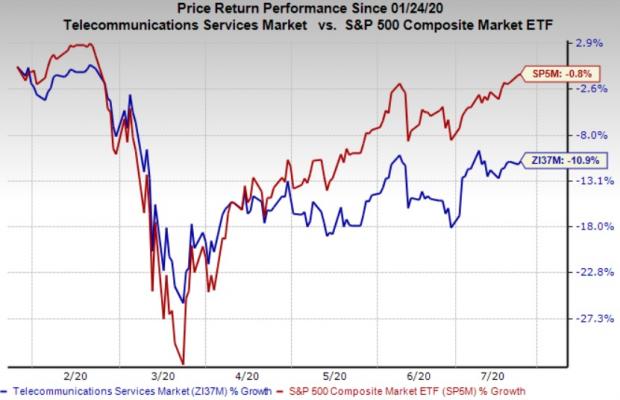 In addition to product launches, deals and 5G deployments, all eyes will remain glued to how the administration attempts to devise pre-emptive steps to thwart China from data intrusion and safeguard the interests of domestic firms.