Adjusted earnings per share of $1.14 beat the Zacks Consensus Estimate by 18.8% and remained flat year over year. Total revenues of $3.38 billion beat the consensus mark by 2.6% but declined 3% year over year on a reported basis and 2% on an organic constant-currency basis.

So far this year, shares of ADP have lost 14% compared with 13.1% decline of the industry. In contrast, the Zacks S&P 500 composite has risen 0.7% in the said time frame. 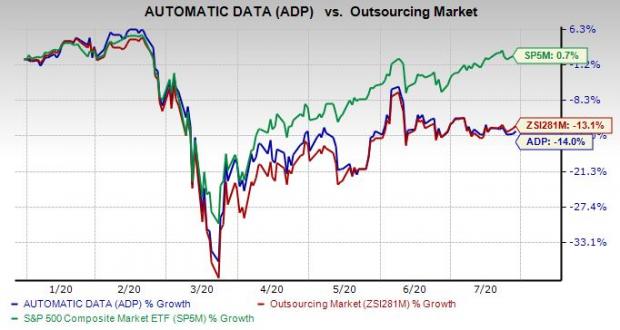 PEO Services revenues were up 4% year over year to $1.08 billion. Average worksite employees paid by PEO Services were 548,000, down 3% from the prior-year quarter.

Adjusted EBIT decreased 2% year over year to $653 million. Adjusted EBIT margin grew 10 basis points from the year-ago quarter to 19.3%, backed by prudent expense management and cost savings related to transformation initiatives, which were partially offset by a decline in revenues combined with ADP's continued investment in sales, services and products.

ADP exited fourth-quarter fiscal 2020 with cash and cash equivalents of $1.91 billion compared with $1.71 billion in the prior quarter. Long-term debt of $1 billion was flat year over year.

The company generated $776.6 million of cash from operating activities in the quarter. Capital expenditures were $33.4 million. The company paid out dividends worth $391.6 million and did not repurchase any shares.

Robert Half (RHI - Free Report) reported second-quarter 2020 earnings of 41 cents per share beat the consensus mark by 17% but were down 58% year over year.

Eversource (ES) to Report Q2 Earnings: What's in the Cards?