Shares of AstraZeneca were up 2.4% in pre-market trading on Jul 30, following the better-than-expected second-quarter results. This year so far, the company’s shares have risen 13.6% compared with increase of 1.1% for the industry. 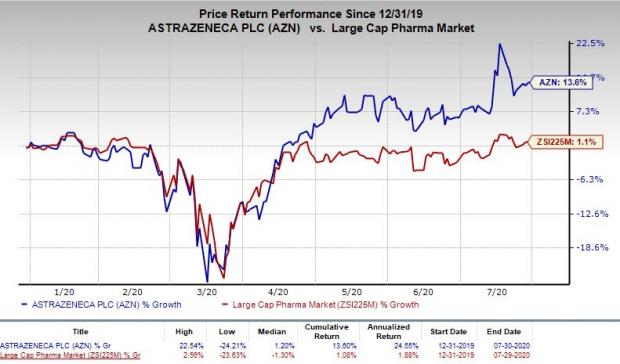 Total revenues were up 8% (11% at CER) to $6.28 billion in the reported quarter, driven by higher product sales. Revenues slightly beat the Zacks Consensus Estimate of $6.25 billion.

Product sales rose 9% at CER to $6.05 billion driven by higher demand for its newer medicines and double-digit growth in asthma medicine, Symbicort’s sales.

Collaboration revenues were $227 million, compared with $43 million in first-quarter 2020.

In Oncology, Lynparza product revenues rose 52% year over year to $419 million on the back of expanded use in ovarian and breast cancer, especially first-line ovarian cancer.  AstraZeneca markets Lynparza in partnership with Merck (MRK - Free Report) . In May, the drug received approval for treating HRR gene-mutated metastatic castration-resistant prostate cancer. It was also approved as first-line maintenance treatment in combination with Roche’s (RHHBY - Free Report) Avastin (bevacizumab) for HRD-positive advanced ovarian cancer in the same month.

Tagrisso sales crossed the billion-dollar mark for the first time in any single quarter. The drug recorded sales of $1.03 billion, up 35% year over year driven by continued demand growth in the second-line setting, especially in China, and strong uptake in the first-line setting.

Imfinzi generated sales of $492 million in the quarter, up 48% year over year mainly driven by strong demand in advanced lung cancer patients.

Calquence generated sales of $107 million in the quarter compared with $88 million in the previous quarter which was majorly driven by the CLL indication, launched toward the end of last year.

Iressa sales were down 38% to $70 million. Sales of older cancer drugs, Faslodex and Casodex declined while Zoladex increased. Arimidex sales were flat.

In CVRM, Brilinta/Brilique sales were $437 million in the reported quarter, up 16% year over year driven by continued patient uptake in acute coronary syndrome and high-risk post-myocardial infarction indications.

Farxiga recorded product sales of $443 million in the quarter, up 23% year over year as strong growth in China and Europe was partially offset by weaker sales in the United States.

Pulmicort sales declined 69% to $97 million reflecting the continued adverse impact of COVID-19 on the medicine’s sales in China during the quarter.

Fasenra recorded sales of $227 million in the quarter, up 37% year over year driven by higher sales in the United States, Japan and Europe.

Bevespi, a LAMA/LABA in a pressurized metered dose inhaler, recorded sales of $10 million in the quarter, lower than $12 million recorded in the previous quarter, amid slower-than-anticipated growth in LAMA/LABA class.

AstraZeneca has become one of the leading players in the field of coronavirus vaccine development. The company is developing its coronavirus vaccine candidate, AZD1222 in collaboration with Oxford University in a phase III study. Late-stage studies are ongoing in the UK, Brazil and South Africa and are due to start in the United States soon. Data from a phase I/II study announced last week, showed that patients vaccinated with the candidate generated strong antibody and T-cell responses in the majority of patients. Moreover, the company has signed supply deals with several countries under which it has committed to supply 2 billion doses of the vaccine, if it is successfully developed. Other leading players include Moderna (MRNA - Free Report) and Pfizer.

Apart from the vaccine, the company is also evaluating Calquence and Farxiga in combination with current standard of care in phase II studies for treating severe COVID-19 patients who requires hospitalization. Enrollment is ongoing in these studies.

Moreover, AstraZeneca has identified a novel SARS-CoV-2-neutralising monoclonal antibody, AZD7442. The company is planning to initiate a phase I/II study soon to evaluate it as potential treatment for COVID-19.

AstraZeneca retained its guidance for total revenues and core EPS for 2020. The company expects total revenues to grow in a high single-digit to a low double-digit range. The company expects core EPS guidance to increase in a mid- to high-teens percentage. Currency changes are expected to have a low single-digit adverse impact on sales and core EPS in 2020.

However, AstraZeneca stated that the uncertainty from the impact of COVID-19 remain and performance between quarters may vary.