Revenues in the quarter declined 47.1% year over year to $691 million. However, the revenue figure beat the Zacks Consensus Estimate of $630 million.

Selling, general and administrative expenses dropped 31.7% year on year to $99.7 million in the June-end quarter. Terex reported an operating profit of $7.4 million compared with the year-ago quarter’s $126 million. Operating margin came in at 1.07% compared with the 9.6% witnessed in the year-earlier period.

The Aerial Work Platforms (AWP) segment generated revenues of $414 million in the second quarter, significantly down 52.4% from the year-ago quarter. The segment reported an operating loss of $5 million, as against the operating profit of $86.3 million recorded in the prior-year quarter.

Terex anticipates sales in the second half of the ongoing year to be similar to the first half of the year, thanks to the current market conditions. Its operating results will be negatively impacted further by the pandemic-related crisis. Terex is focused on aligning its production plans in response to lower customer demand. The company will continue to focus on managing its cost and working capital.

Terex's shares have appreciated 42.9% over the past three months, outperforming the industry’s growth of 23.6%. 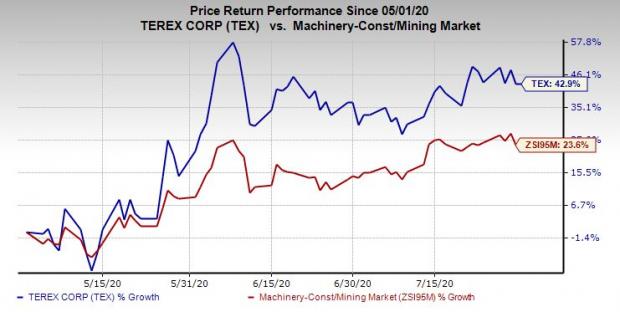 Silgan has a projected earnings growth rate of 31.5% for the current year. The company’s shares have gained 13.1% in the past three months.

IIVI has an estimated earnings growth rate of 29% for the ongoing year. The company’s shares have rallied 46% in three months’ time.

Energous has an expected earnings growth rate of 44% for 2020. The stock has soared 252.6% over the past three months.

Devon (DVN) to Report Q2 Earnings: What's in the Offing?