Net sales of $88.9 billion comfortably surpassed the Zacks Consensus Estimate of $81.6 billion and exceeded management’s guided range of $75 billion and $81 billion. Further, the figure increased 40.2% on a year-over-year basis and 17.8% sequentially.

Additionally, strengthening relationship with third-party sellers remained a major positive. Notably, sales generated by these sellers rose 53% on a year-over-year basis. Further, strong performance delivered by subscription services, which exhibited an improvement of 30% year over year, contributed to the top line.

Notably, shares of the company were up 5.4% in the pre-market trading owing to its stellar second-quarter performance.

The company generated strong profits in the reported quarter despite spending heavily in order to manage the unprecedented situation induced by coronavirus.

As announced during the first-quarter earnings call, the company spent over $4 billion during the second quarter to protect its workforce from COVID-19 and speed up delivery time during this pandemic situation.

Nevertheless, the company generated $5.2 billion worth net income in the second quarter.

Coming to price performance, Amazon has returned 72.9% on a year-to-date basis, outperforming the industry’s rally of 48.4%. 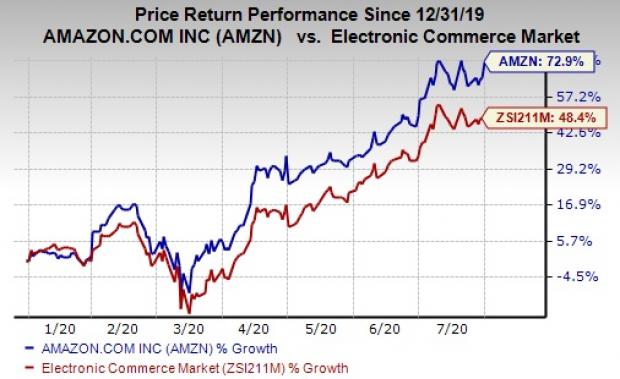 Amazon Prime momentum continued to benefit the company during the reported quarter on the back of robustgrocery servicesand customer-oriented benefitsdespite coronavirus-induced disruptions.

The company expanded grocery delivery capacity by 160% in the second quarter, which helped it in gaining strong momentum in online grocery shopping.

Further, Prime Video premiered original series namely Upload, Season 2 of Homecoming and Season 6 of Bosch during the reported quarter. Further, it premiered a docuseries called Regular Heroes based on the COVID-19 scenario.

Additionally, Amazon expanded its movie portfolio by streaming Selah and the Spades, The Goldfinch, The Vast of Night, 7500, and My Spy during the reported quarter.

Furthermore, the launch of Watch Parties feature and Prime Video Profiles was a positive.

During the to-be-reported quarter, Amazon Web Services (AWS) introduced Amazon Honeycode, which is a fully managed service that is ideal for seamless creation of interactive web and mobile applications.

Further, the company entered into a multi-year agreement with Slack Technologies in the second quarter to offer integrated enterprise software tools.

With the aid of expanding services portfolio, AWS gained strong traction among new customers including IHS Markit, Capella Space and Genesys during the reported quarter.

Further, the company witnessed solid momentum across its sports customers like Budesliga and Formula 1 in the quarter under review.

Amazon continued to enhance skills and features of Alexa during the reported quarter. Advanced features that include setting of reminders across all Alexa devices, nutrition tips, new notification capabilities with Routines and announcements on smartphones as push notification were added.

Moreover, expanding international availability of the Echo Devices remained positive. The company made Echo Auto available in Australia, Canada, France, Germany, Italy, Spain, and the U.K. It also made Echo Dot with clock and Echo Studio available in Brazil.

Also, the company made eero mesh WiFi systems available in Australia and Mexico.

Operating expenses were $83.1 billion, up 37.7% from the year-ago quarter. As percentage of revenues, the figure contracted 170 bps on a year-over-year basis to 93.4%.

Other operating expenses were $290 million during the second quarter compared with $86 million in the year-ago quarter.

Operating income for AWS was $3.6 billion, up 58.3% year over year.Further, the same for North America improved36.9% from the prior-year quarter to $2.1 billion.

Further, International segment reported operating income of $345 million against a loss of $601 million in the year-ago quarter.

Further, the company generated $20.6 billion of cash from operation in the second quarter, which increased significantly from $3.1 billion in the prior quarter.

For third-quarter 2020, Amazon expects net sales between $87 billion and $93 billion. The figure is anticipated to improve in the range of 24-33% on a year-over-year basis. The Zacks Consensus Estimate for net sales is pegged at $86.8 billion.

This guidance is inclusive of more than $2 billion costs related to COVID-19.