In the past three months, shares of the company have surged 119.6% compared with the industry’s growth of 23.3%. 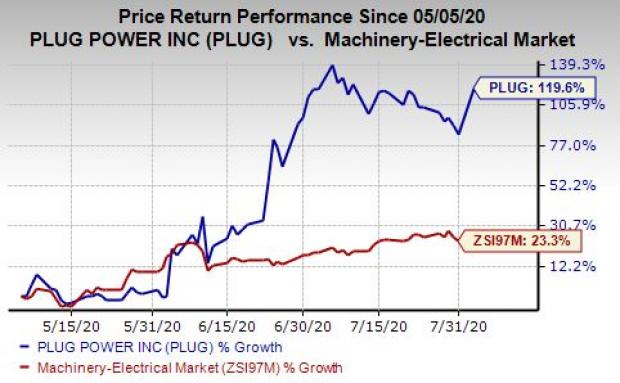 The growing popularity of fuel cell engines and hydrogen stations has been benefiting Plug Power over the past few quarters. This is expected to have contributed to its top-line performance in the second quarter of 2020 as well. Also, strength across on-road and stationary power markets along with its efforts to strengthen sales channels are expected to have been beneficial.

Moreover, the company launched several premium products for warehouses and manufacturing facilities, which are expected to have supported its top-line performance in the quarter. Notably, its major product offerings include GenDrive fuel cell systems and ProGen fuel cell engine. In addition, Plug Power is likely to have benefited from its cost-reduction efforts and greater operational efficacy in the to-be-reported quarter.

However, the impacts of the coronavirus outbreak on the supply chain and demand for the company’s products along with the governmental regulations imposed in response to the pandemic are expected to get reflected in its second-quarter results.

Further, international operations have exposed Plug Power to risks arising from unfavorable movements in foreign currencies and geopolitical issues, which are expected to have hurt it. In addition, higher cost of revenues and operating expenses are expected to have been dragging.

The Zacks Consensus Estimate for second-quarter loss per share is pegged at 9 cents, whereas it reported a loss per share of 8 cents in the second quarter of 2019. However, the consensus estimate for revenues of $57 million suggests no change from the prior-year reported figure.

Earnings ESP: Plug Power has an Earnings ESP of 0.00% as both the Most Accurate Estimate and the Zacks Consensus Estimate are pegged at loss per share of 9 cents.

Graphic Packaging Holding Company (GPK - Free Report) presently has an Earnings ESP of +1.66% and it sports a Zacks Rank of 1. You can see the complete list of today’s Zacks #1 Rank stocks here.

IIVI Incorporated (IIVI - Free Report) currently has an Earnings ESP of +4.56% and it flaunts a Zacks Rank #1.

Cintas Corporation (CTAS - Free Report) has an Earnings ESP of +2.02% and a Zacks Rank of 2 at present.