Summary of the Past Week’s Top Stories

1.    Allegiant Travel’s second-quarter 2020 loss of $5.96 per share (excluding 11 cents from non-recurring items) was wider than the Zacks Consensus Estimate of a loss of $4.53.  However, the company reported earnings of $4.33 per share in the year-ago quarter when air-travel demand was strong. Meanwhile, with the advent of coronavirus, the same plummeted and hurt second-quarter 2020 results. Moreover, quarterly revenues of $133.3 million plunged 72.9% year over year due to soft passenger revenues.

2.    Gol Linhas incurred a loss (excluding $1.27 from non-recurring items) of 81 cents per share in the second quarter of 2020, narrower than the Zacks Consensus Estimate of a loss of $1.1. However, net operating revenues of $66.7 million missed the Zacks Consensus Estimate of $152.9 million and also declined year over year. Further, passenger revenues tanked 91.8% on a year-over-year basis due to muted air-travel demand amid coronavirus concerns. The company expects to have liquidity of R$2.9 billion at the end of the third quarter. Adjusted net debt is estimated to be R$13.8 billion as of the same period.

3.    SkyWest‘s second-quarter 2020 loss of 51 cent per share was worse than the Zacks Consensus Estimate of a loss of a couple of cents.  Moreover, quarterly revenues of $350 million tumbled 53% year over year and missed the Zacks Consensus Estimate of $352.4 million as well. The COVID-19 outbreak caused a significant reduction in the number of scheduled flights, thereby hurting the top line.

4.    Ryanair Holdings posted bland traffic statistics for July, primarily due to bleak air-travel demand, stemming from the COVID-19 crisis. This Irish carrier reported a 70% year-over-year slump in last month’s traffic to merely 4.4 million passengers. Ryanair operated approximately 40% of the normal July schedule with a load factor (% of seats filled with passengers) of 72%. On a rolling annual basis, total traffic at Ryanair (including the LaudaMotion unit) dropped 35% to 96.8 million.

5.    With air-travel demand again drooping following the spike in coronavirus cases across some parts of the United States, United Airlines (UAL - Free Report) warned that it may have to furlough more pilots than the original plan of 2,250, per a CNBC report. Spirit Airlines (SAVE - Free Report) too followed suit, having sent notices to its unions about the possibility of some of its pilots, flight attendants and other employees getting furloughed in October. Notably, the financial aid under the CARES act protects jobs at the airlines only through Sep 30, 2020. Naturally, airlines are planning to extend the period. 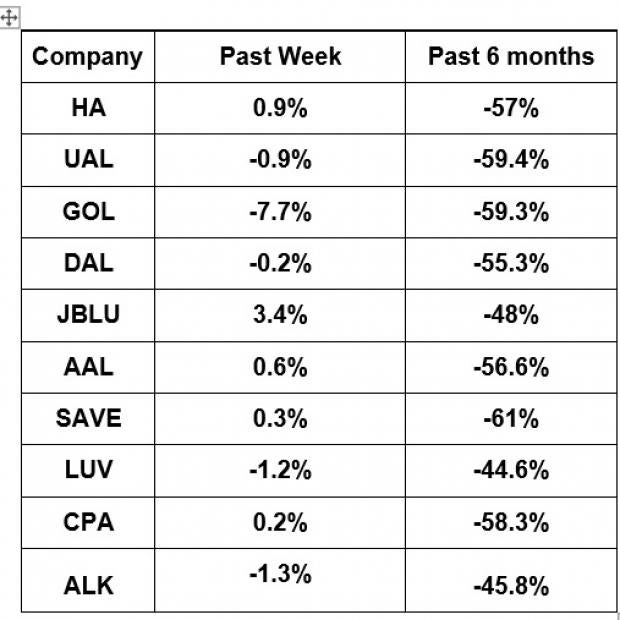 Investors will keenly await the updates on airlines’ efforts to gain an extension of the U.S. payroll support program beyond Sep 30.