Bristol-Myers Squibb Company (BMY - Free Report) reported better-than-expected results for the second quarter of 2020 as blood thinner drug, Eliquis, and addition of sales from Celgene’s drugs (acquired in November 2019) maintained momentum.  The company lifted its earnings guidance for 2020 in hope of a possible recovery in the second half of 2020.

Shares were up in pre-market trading following the earnings release. Bristol-Myers’ shares have lost 7% in the year so far against the industry's growth of 5.7%. 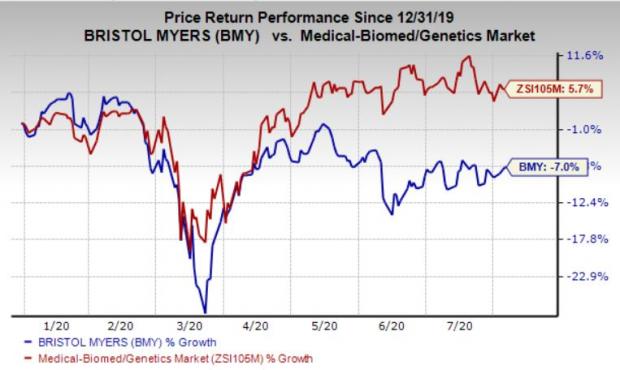 Total revenues of $10.12 billion beat the Zacks Consensus Estimate of $10.1 billion and surged 61% from $6.3 billion in the year-ago period. Strong growth was mainly driven by the addition of Celgene’s products.

On a pro-forma basis, revenues were consistent as sales were negatively impacted by approximately $600 million mainly due to COVID-19-related channel inventory work downs from the first quarter as well as lower demand resulting from reduced new patient starts and fewer patient visits to physicians during the pandemic.

Revenues increased 77% to $6.5 billion in the United States and 40% outside the country. Ex-U.S. revenues were up 43% when adjusted for foreign exchange impact.

Eliquis witnessed strong growth, rising 6% to $2.2 billion. We note that Bristol-Myers has a collaboration agreement with Pfizer (PFE - Free Report) for Eliquis. However, sales of Opdivo, which is approved for multiple cancer indications, declined 9% year over year to $1.65 billion.

Leukemia drug, Sprycel, raked in sales of $511 million, down 6% year over year. Sales of rheumatoid arthritis drug, Orencia, were down 4% to $750 million. Melanoma drug, Yervoy, contributed $369 million to the top line, up 1% year over year.

The performance of key drugs in the Virology unit was disappointing. Sales of Baraclude declined 18% to $121 million. Sales of other brands (including Sustiva, Reyataz, Daklinza and all other products that have lost exclusivity in major markets) fell 31% year over year to $331 million.

Myeloma drug, Revlimid, added with Celgene’s acquisition, contributed $2.9 billion to the top line and was the top-revenue generator for Bristol-Myers. Other key drugs from Celgene — Pomalyst and Abraxane — generated sales of $745 million and $308 million, respectively.

Adjusted research and development (R&D) expenses in the quarter increased to $2.2 billion from $1.3 billion. Adjusted marketing, selling and administrative expenses grew to $1.6 billion from $1.1 billion.

In June, the FDA approved Opdivo for the treatment of patients with unresectable advanced, recurrent or metastatic esophageal squamous cell carcinoma (ESCC) after prior fluoropyrimidine- and platinum-based chemotherapy.

The FDA also approved Opdivo plus Yervoy given with two cycles of platinum-doublet chemotherapy for the first-line treatment of adult patients with metastatic or recurrent non-small cell lung cancer (NSCLC) with no EGFR or ALK genomic tumor aberrations. This approval was based on results from the CheckMate -9LA study.

Moreover, the FDA approved Opdivo plus Yervoy for the first-line treatment of adult patients with metastatic NSCLC whose tumors express PD-LI>1% as determined by an FDA-approved test, with no EGFR or ALK genomic tumor aberrations. This approval was based on data from Part 1a of the Checkmate -227 study.

In May, Zeposia was approved in Europe for the treatment of adult patients with relapsing forms of multiple sclerosis.

In June, the company and partner Acceleron Pharma Inc. (XLRN - Free Report) obtained the European Commission’s (EC) approval for Reblozyl for the treatment of transfusion-dependent anemia in adult patients with myelodysplastic syndromes (MDS) or beta thalassemia.

The company expects returning to a stable business environment in the third quarter and minimal impact of the pandemic fourth quarter onward.

Bristol-Myers’ performance in the second quarter was encouraging. Earnings and sales beat estimates primarily on the addition of Celgene’s drugs to its portfolio. However, weak Opdivo sales are concerning.  The drug faces stiff competition from Merck’s (MRK - Free Report) Keytruda and Roche’s Tecentriq.

The acquisition of Celgene holds promise as it boosted Bristol-Myers’ oncology franchise. The increase in the earnings guidance was positive as well and should boost investor sentiment.