On a reported basis, the company posted earnings of 28 cents per share compared with the prior-year quarter’s 58 cents.

Total sales came in at $2,801 million in the reported quarter, down 7.2% from the year-ago quarter. The top-line figure also missed the Zacks Consensus Estimate of $2,865 million.

The Beverage packaging’s North and Central America segment revenues declined to $1,267 million during the April-June period from the year-ago quarter’s $1,286 million. Operating earnings surged 34% year over year to $189 million.

Sales at the Beverage packaging, EMEA segment came in at $699 million in the second quarter, down 8.9% year over year. Operating earnings plunged 35.7% year over year to $63 million.

The Beverage packaging South America segment’s revenues declined to $329 million in the second quarter from the $377 million witnessed in the prior-year period. Operating earnings fell to $46 million from the year-earlier quarter’s $65 million.

In the Aerospace segment, sales rose 15.6% year over year to $438 million. Operating earnings declined to $30 million from the year-ago quarter figure of $38 million. As of the end of the reported quarter, the segment’s contracted backlog was $2.1 billion and contracts already won, but not yet booked into current contracted backlog, increased 10% year to date to $5.3 billion.

Given the significant growth prospects in North American beverage business, the company anticipates current-year capital expenditures to exceed $900 million. The company is on track to meet the previously-announced projects and will continue to deploy additional capital across its existing business portfolio to support new customer wins.

The company expects to increase its earnings per diluted share in the ongoing year. Moreover, Ball Corporation maintains its expectation to deliver long-term diluted earnings per share growth of at least 10-15% beyond 2020 and achieve additional EVA (economic value added) dollars enhancing opportunities.

Ball Corporation’s shares have gained 14.5% over the past three months compared with the industry’s growth of 14.6%. 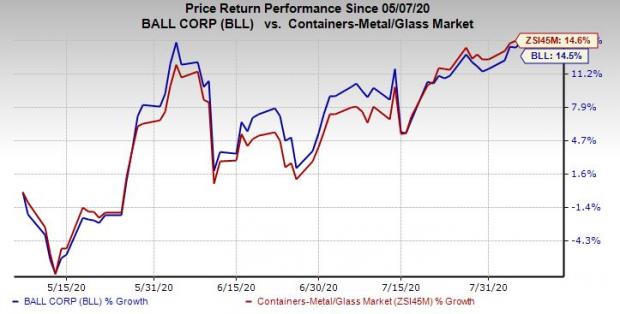 Silgan has a projected earnings growth rate of 31.5% for the current year. The company’s shares have gained 13.1% in the past three months.

IIVI has an estimated earnings growth rate of 29% for the ongoing year. The company’s shares have rallied 46% in three months’ time.

Energous has an expected earnings growth rate of 44% for 2020. The stock has soared 252.6% over the past three months.