Will Dow Gather Pace on the Latest 'Golden Cross' Formation?

Wall Street's new bull market that started in mid-April, ending the coronavirus-induced short bear-market, has maintained its momentum so far. After rallying in the last four consecutive months, the three major stock indexes — the Dow, the S&P 500 and the Nasdaq Composite — are likely to finish the first week of August on a positive note.

However, comparing these three large-cap-centric indexes, the Dow is significantly lagging its peers. Nevertheless, a 'golden cross' was formed in the Dow Jones Industrial Average on Aug 6. Let's discuss whether the blue-chip index is poised for a momentum.

Golden Cross and Its Implication

On Aug 6, the 50-day and 200-day moving averages of the Dow were at 26,254.47 and 26,230.69, respectively. This is the first golden cross formation for the blue-chip index since Mar 20. The last golden cross for the Dow was formed on Mar 19, 2019 and the rally continued for a year until a 'death cross' (opposite of golden cross) was formed at the onset of the coronavirus pandemic.

All the three key indexes were at their lowest levels last on Mar 23. Since then, the Nasdaq Composite, the S&P 500 and the Dow have rallied nearly 62%, 50% and 47%, respectively.

Meanwhile, a series of economic data for May and June like job market, housing market, vehicle sales, retail sales, manufacturing, services and consumer confidence indicated that the pandemic-led economic devastations were not as severe as expected earlier. Unprecedented fiscal and monetary stimulus provided by the U.S. government and the Fed generated huge pent-up demand and helped the economy to remain stable.

Despite the second wave of COVID-19 since mid-June, the three economic data for July that were released, namely manufacturing, services and vehicles sales, are highly encouraging. This indicates that the U.S. economy will gradually return to the pre-pandemic level as more parts of it reopen. Finally, a second trench of fiscal stimulus of more than $1 trillion, which is expected to be injected by next week, will bolster the U.S. economy.

We believe these positives will set gains in motion for stocks from cyclical sectors such as industrials, financials, materials and consumer discretionary.

Except Walmart, all the other stocks carry either a Zacks Rank #1 (Strong Buy), 2 (Buy) or 3 (Hold). You can see the complete list of today’s Zacks #1 Rank stocks here.

The chart below shows the price performance of the above-mentioned nine stocks year to date. 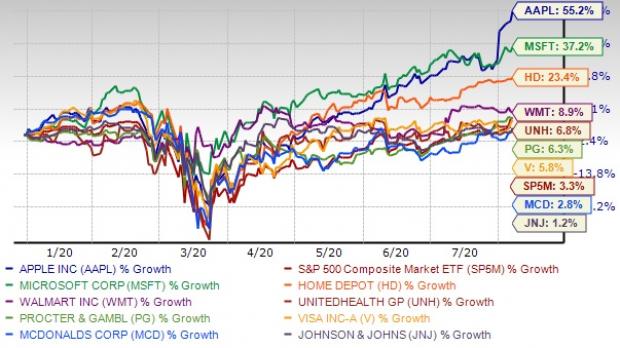