Revenues of $339.9 million surpassed the Zacks Consensus Estimate of $314 million and came within management’s guided range of $285-$345 million. Notably, the top line soared 152.1% from the year-ago quarter and 7.7% from the prior quarter.

The year-over-year improvement in the top line can be attributed to growing demand across major end markets.

Further, the company delivered strong performance in North America and Asia regions during the reported quarter, which remained a major positive.

Coming to price performance, Advanced Energy has returned 8.4% on a year-to-date basis, underperforming the industry’s rally of 20.6%.

All these factors are likely to help the stock rebound in the near term. 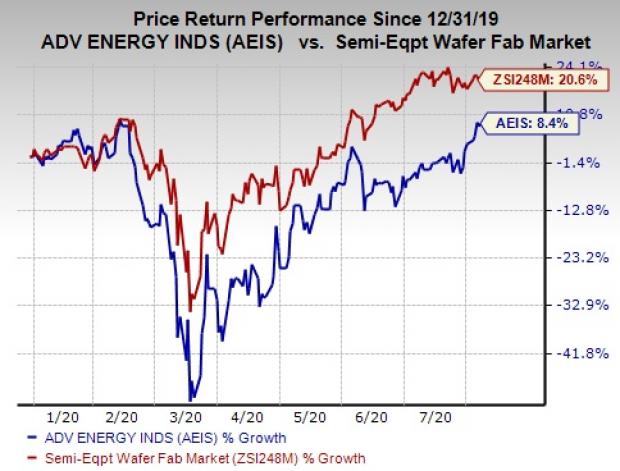 Services revenues declined 1.8% from the prior-year quarter to $28.1 million (8.3% of revenues). This was primarily due to sluggish semiconductor service business.

Industrial & Medical revenues improved 58.4% year over year to $70.9 million (20.9% of revenues). This can be attributed to increasing demand for critical care medical devices. Further, growthin thin film market was a tailwind.

In second quarter, non-GAAP gross profit was 38.7%, which contracted 900 basis points (bps) from the year-ago quarter.

Non-GAAP operating expenses were $77.8 million, up 65.5% year over year. As a percentage of revenues, the figure contracted significantly from 34.9% in the year-ago quarter to 22.9% in the reported quarter.

During the second quarter, cash flow from operations was $38.6 million compared with $28.5 million in the first quarter.

Capital expenditure during the reported quarter was $7.3 million, down from $6.1 million in the prior quarter.

For third-quarter 2020, Advanced Energy expects non-GAAP earnings between 9 cents and $1.40 per share. The Zacks Consensus Estimate is pegged at 70 cents per share.

Further,  the company anticipates revenues in the range of $325-$375 million.

Further, the company anticipates volatility in demand in data center computing, and telecom and networking markets.