Adjusted earnings per share of 81 cents outpaced the consensus mark by 35% and improved 3% year over year.

So far this year, shares of Republic Services have gained 2% against 15.1% decline of the industry it belongs to. The Zacks S&P 500 composite has risen 4% in the said time frame. 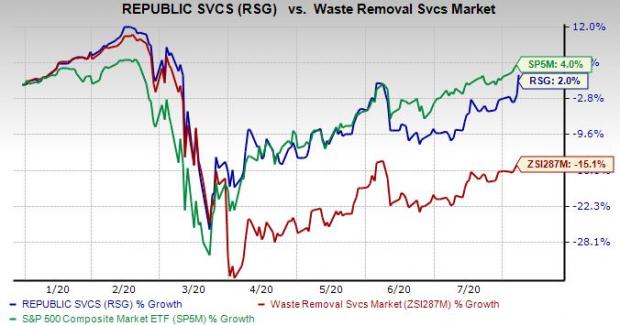 Quarterly revenues of $2.45 billion beat the consensus estimate by 2.5% but decreased 5.8% year over year. Unfavorable impact of 6.5% internal growth was partially offset by 70 basis points positive impact of acquisitions.

Adjusted EBITDA of $726 million was almost flat year over year. Adjusted EBITDA margin of 29.6% grew 170 basis points (bps) from the prior-year quarter. This included a 110 bps benefit from higher recycled-commodity prices and lower fuel costs and 130 bps headwind from $31 million of coronavirus-related costs.

Total selling, general and administrative expenses were $262.1 million compared with $264.5 million in the year-ago quarter.

The company generated $764 million of cash from operating activities and spent $307.9 million in capex in the reported quarter. Adjusted free cash flow was $476.3 million.

The company invested $61 million in acquisitions in the reported quarter.

During the reported quarter, the company did not repurchase any shares. As of Jun 30, 2020, the company had $605.8 million available under its October 2017 repurchase program.

Equifax (EFX - Free Report) reported better-than-expected second-quarter 2020 adjusted earnings of $1.60 per share, whichnbeat the Zacks Consensus Estimate by 22.1% and improved 14.3% on a year-over-year basis. The reported figure exceeded the guided range of 78-88 cents.