The company benefited from strong manufacturing performance and actions to reduce operating expenses.

Revenues were $104.6 million for the reported quarter, down roughly 8% year over year. It missed the Zacks Consensus Estimate of $116.4 million.

American Vanguard saw lower sales in its domestic and international businesses in the reported quarter. Sales in the quarter were hurt by the impacts of the coronavirus pandemic and unfavorable currency exchange translation.

Sales by Regions and Categories

Sales from the domestic non-crop business went down 18% year over year to around $13.9 million.

Revenues from international businesses fell around 5% year over year to around $46 million.

American Vanguard said that it is well placed to address its markets over the remainder of 2020. The company expects to benefit from favorable conditions for its mosquito control business, improved supply of Krovar and Hyvar herbicides, strength of its soil fumigants and growth of its corn and soybean franchises. It also remains committed to pursue its key strategic initiatives for future growth.

American Vanguard’s shares are up 11.7% over a year, compared with the 7% decline of the industry it belongs to. 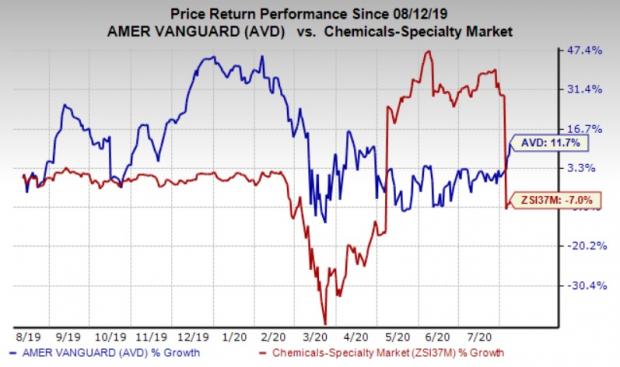 Barrick Gold has a projected earnings growth rate of 74.5% for the current year. The company’s shares have gained around 61% in a year. It currently has a Zacks Rank #1 (Strong Buy). You can see the complete list of today’s Zacks #1 Rank stocks here.

Equinox Gold has a projected earnings growth rate of 255.2% for the current year. The company’s shares have rallied roughly 107% in a year. It currently carries a Zacks Rank #2 (Buy).

Eldorado Gold has an expected earnings growth rate of 2,225% for the current year. The company’s shares have shot up around 46% in the past year. It presently carries a Zacks Rank #2.