Shares of the company have lost 37.4% in the year so far compared with the industry’s decline of 5%. 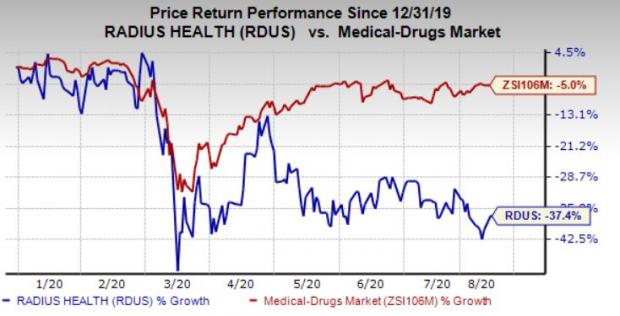 The company reported revenues of $50.1 million, surpassing the Zacks Consensus Estimate of $48 million. The figure increased from the year-ago quarter’s $41 million owing to continued growth in demand and net price improvement. Lead drug Tymlos is approved for the treatment of postmenopausal women with osteoporosis at high risk of fracture.

Research & development expenses for the reported quarter were $44.9 million, flaring up 65% year over year primarily due to a rise in elacestrant project and abaloparatide-patch project costs. General & administrative expenses decreased 5% to $38.2 million.

The wearABLe phase III study with abaloparatide-patch in postmenopausal osteoporosis continues to advance enrollment globally. Completion of enrollment remains on track for the latter part of the third quarter of 2020.

Enrollment in the phase III study, ATOM, which is assessing the efficacy and safety of abaloparatide-SC in men with osteoporosis, is expected to complete shortly.

Radius reported a wider-than-expected loss in the second quarter but sales beat estimates. Tymlos held up pretty well amid the pandemic. The pipeline progress has been impressive as well. However, competition is stiff from bigwigs like Eli Lilly & Co's (LLY - Free Report) Forteo and Amgen's (AMGN - Free Report) Prolia.