However, the better-than-expected results failed to impress the market, which is evident from the price decline of 1.6% since the company reported its second-quarter 2020 results on Aug 6. 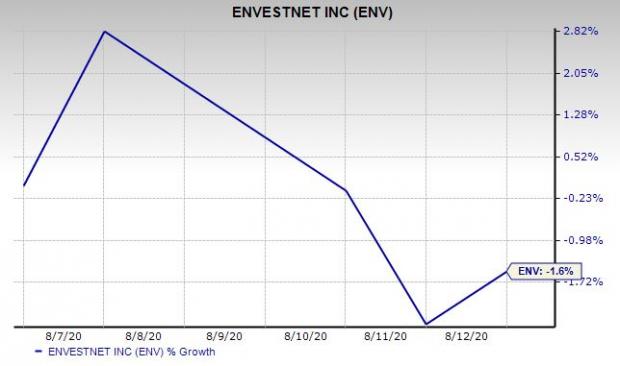 Adjusted earnings per share of 59 cents beat the Zacks Consensus Estimate by 25.5% and increased 28.3% year over year. Revenues of $235.3 million surpassed the consensus mark by 3.5% and climbed 4.8% year over year.

Envestnet ended the second quarter with cash and cash equivalent balance of $92.2 million compared with $68.6 million at the end of the prior quarter. The company generated around $56 million of cash from operating activities. CapEx was $2.2 million.

Adjusted revenues are anticipated between $244.5 million and $246 million. Adjusted net revenues are projected in the range of$174.5-$176.5 million. The company expects adjusted EBITDA in the band of $56 million to $57 million.

Total revenues are now anticipated between $976.3 million and $979.3 million compared with the prior-guided range of $939.5-$945.5 million.The Zacks Consensus Estimate of $982.93 million lies above the updated guidance.

Walmart Adds Feather to its Delivery Cap With Instacart Deal