Toyota & Mazda Increase Investment in Alabama Factory to $2.3B

The additional spending will incorporate new cutting-edge manufacturing technologies into the companies’ production lines and provide enhanced training to the workforce. The factory is now targeted to have 4,000 new workers and currently has about 600 employees.

The production of up to 150,000 Mazda crossover and 150,000 Toyota Sport Utility Vehicles per annum is scheduled to begin next year. The Japanese automakers are expected to receive $97 million in additional tax incentives for the added investment. Notably, the Alabama state and local governments have previously provided tax benefits in excess of $700 million.

The carmakers faced challenges as they continued construction work amid the coronavirus crisis on the plant, which will now cost about 50% more than the initial expectation. The plant's roofing, siding, floor slabs, ductwork, fire protection and electrical works are 75-100% complete.

Mazda and Toyota’s increased commitment to the development of this manufacturing plant reaffirms their confidence in the potential of manufacturing in the United States and the possibility that the State of Alabama might become an economical pioneer despite the drastic structural reforms.

Meanwhile, Toyota is increasing its focus on manufacturing electric and fuel-cell vehicles in order to bank on the accelerated global shift to electric cars, which will bolster the company’s product competitiveness. By 2025, it plans to introduce fuel-cell-enabled SUVs, and pick-up and commercial trucks. Additionally, Toyota is working on hydrogen fuel stations in collaboration with various partners. The company aims to generate half of its global sales from electric vehicles by 2025.

While Toyota currently carries a Zacks Rank #4 (Sell), Mazda is a Zacks Ranked #3 (Hold) stock. Shares of Toyota and Mazda have depreciated 3.5% and 26.1%, respectively, year to date. 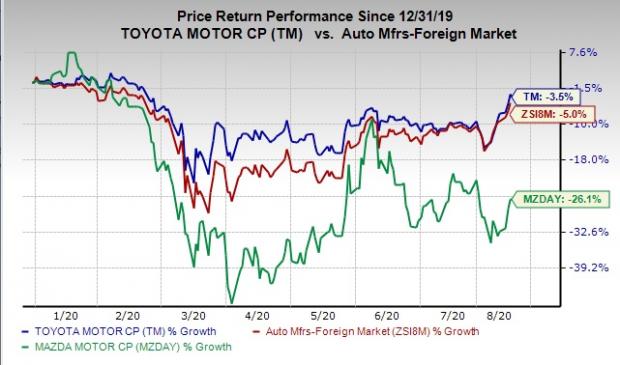 Some better-ranked stocks in the auto sector include Sonic Automotive Inc. (SAH - Free Report) and LCI Industries (LCII - Free Report) , both sporting a Zacks Rank of 1 (Strong Buy), at present. You can see the complete list of today’s Zacks #1 Rank stocks here.

Shares of Sonic Automotive have appreciated 46.4%, year to date, compared with the industry’s rise of 16.8%.

Shares of LCI Industries have appreciated 18.4%, year to date, compared with the industry’s rally of 0.1%.

General Motors 2023 Cadillac Lyriq to be Priced Below $60K