Toyota Teams Up With Amazon for Cloud-Based Data Services

Toyota’s Mobility Services Platform enables data to be collected and reviewed for the development of vehicle services from ride and car sharing to behavior-based insurance and maintenance notifications.

This deal extends Toyota's existing relationship with AWS and represents the e-commerce giant’s expanding foray into the transportation business. In July, AWS announced the expansion of its partnership with Volkswagen AG (VWAGY - Free Report) in order to help grow the automaker’s cloud-based software and data portal into an industry-wide market, where commercial clients can access and sell industrial applications.

Further, Toyota and Mazda Motor Corporation (MZDAY - Free Report) recently announced their plans to invest $2.3 billion in a new joint venture (JV) factory in Alabama, $830 million more than announced in their original plan in 2018. The additional spending will incorporate new cutting-edge manufacturing technologies into the companies’ production lines and provide enhanced training to the workforce.

Meanwhile, Toyota is increasing its focus on manufacturing electric and fuel-cell vehicles in order to bank on the accelerated global shift to electric cars, which will bolster the company’s product competitiveness. It plans to introduce fuel-cell-enabled SUVs, and pick-up and commercial trucks by 2025. Additionally, Toyota is working on hydrogen fuel stations in collaboration with various partners. The company aims to generate half of its global sales from electric vehicles by 2025.

Toyota is also making advancement toward self-driving vehicles. It is signing collaboration agreements to develop the autonomous car technology. Moreover, Toyota is shifting half of all the vehicles it makes to new cost-saving platforms, which will slash costs by 20%. The company has strengthened ties with Subaru and the partnership intends to make improved cars suitable for the CASE (connected, autonomous, shared and electric) era.

Toyota currently carries a Zacks Rank #3 (Hold). Shares of the company have depreciated 3.6%, year to date, compared with the industry’s decline of 5.5%. 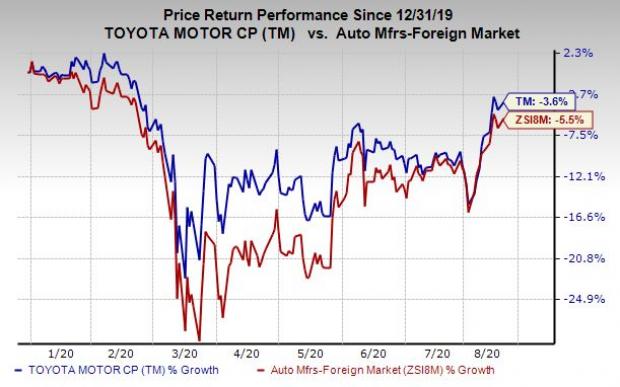