American Airlines also hit the headlines when management announced that it will have to make approximately 19,000 of its employees redundant in October unless the current the payroll-support program, which expires on Sep 30, 2020, is extended. United Airlines also warned of trimming its pilot workforce in absence of more federal aid due to lackluster travel demand. Delta's intention to furlough 1,941 of its pilots due to suppressed demand was mentioned in the previous week’s write-up.

1. United Airlines permanently cancelled change fees on all Economy- and Premium-class tickets for domestic travel with immediate effect. Additionally, all customers can fly standby for free on a flight departing the same day of their booked flight beginning Jan 1, 2021. To offer flexibility in ticket changes, the carrier is also extending the waiver for new tickets issued through Dec 31, 2020. This option is valid for all tickets issued after Mar 3, 2020 on both domestic and international travel.

2. Delta and American Airlines followed suite in permanently scrapping change fees. On the removal of change fees, Delta’s CEO Ed Bastian stated, “We want our customers to book and travel with peace of mind, knowing that we’ll continue evaluating our policies to maintain the high standard of flexibility they expect.” Meanwhile, management at American Airlines stated that customers flying to any of the 50 U.S. States, Canada, Mexico, the Caribbean belt, Puerto Rico and the U.S. Virgin Islands will not have to pay fees for ticket changes when traveling in the main cabin (except Basic Economy), Premium Economy, Business Class and First Class.

3. In a SEC filing, American Airlines authorities announced that it will have to furlough approximately 19,000 of its employees in October as air-travel demand remains suppressed. Following this news, shares of the company dipped 2.2% at the close of business on Aug 25. Per the airline, these furloughs can be avoided if the payroll-support program is extended.

In the same vein, Chicago-based United Airlines reportedly warned that it will have to lay off 2,850 pilots in the Oct 1-Nov 30, 2020 time frame in absence of additional federal relief following the expiry of the existing payroll package.

4. Hawaiian Airlines, the wholly owned subsidiary of Hawaiian Holdings (HA - Free Report) , became the latest airline to announce a probable headcount cut on or after Oct 1, 2020. Per a Sec filing, Hawaiian Airlines officials informed approximately 414 U.S.-based employees in its Air Line Pilots Association (ALPA) and Association of Flight Attendants (AFA) work groups about their potential job losses. The carrier further stated that 28 more employees represented by ALPA will receive individual intimation at a later date. Additionally, the carrier expects to issue similar notices to employees in its International Association of Machinists and Aerospace Workers and Transport Workers Union work groups due to coronavirus-induced soft travel demand.

The following table shows the price movement of major airline players over the past week and during the past 6 months. 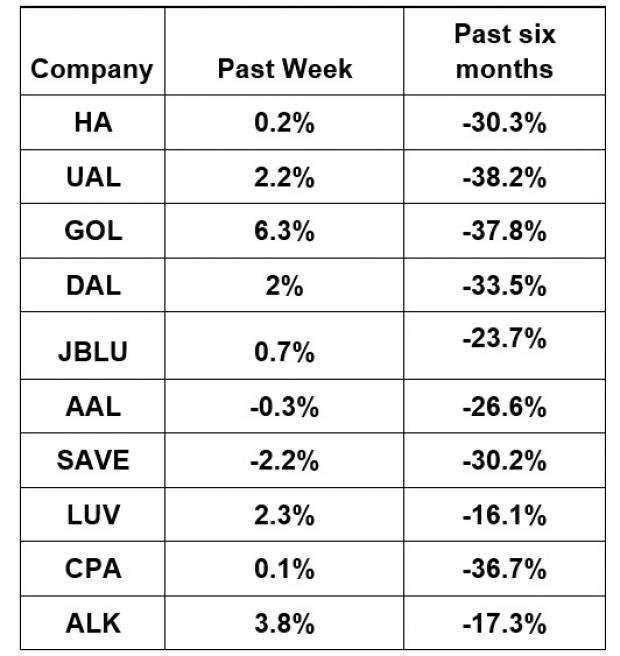 The table above shows that most airline stocks have traded in the green over the past week, leading to the NYSE ARCA Airline Index’s gain of 1.5% value to $59.42. This coronavirus-ravaged industry was boosted by positive updates on the vaccines under evaluation to combat the disease. Over the course of the past six months, the NYSE ARCA Airline Index has depreciated 28.2%.

Here's Why You Should Add Global Partners to Your Portfolio