Cloudera (CLDR - Free Report) reported second-quarter fiscal 2021 adjusted earnings of 10 cents per share, which beat the Zacks Consensus Estimate by 42.9%. The company had reported a loss of 2 cents per share in the year-ago quarter. The robust bottom-line improvement was mainly driven by steady revenue growth and efficient cost management.

Revenues of $214.3 million beat the consensus mark by 3% and increased 9% year over year driven by rapid adoption of its cloud-based products and services.

Cloudera has underperformed Nice, Anaplan and the S&P 500 while outperforming Zuora on a year-to-date basis. 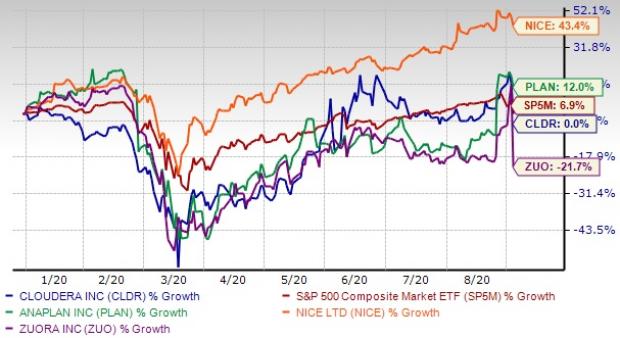 Cloudera’s services (10.6% of revenues) declined 30% year over year to $22.8 million mainly due to coronavirus-led global lockdown.

For the second quarter of fiscal 2021, this Zacks Rank #3 (Hold) company reported non-GAAP income from operations of $29.8 million against non-GAAP loss from operations of $7.4 million reported in the year-ago quarter. You can see the complete list of today’s Zacks #1 Rank (Strong Buy) stocks here.

As of Jul 31, 2020, Cloudera had total cash, cash equivalents, marketable securities and restricted cash of $568.7 million compared with $518.7 million reported in the previous quarter.

Cloudera expects revenues between $207 million and $210 million. The Zacks Consensus Estimate for revenues is currently pegged at $203.4 million, which indicates year-over-year growth of 2.5%.

Subscription revenues are estimated between $187 million and $190 million.

Non-GAAP net earnings are expected between 8 cents and $1 per share. The Zacks Consensus Estimate is pegged at 7 cents per share.

Cloudera expects revenues between $839 million and $853 million. The Zacks Consensus Estimate for revenues is currently pegged at $838.7 million, which suggests year-over-year growth of 5.6%.

Subscription revenues are estimated between $755 million and $765 million.

Non-GAAP net earnings are expected between 32 cents to 35 cents. The Zacks Consensus Estimate for earnings is pegged at 28 cents per share.