In March 2020, Savara stopped enrollment in the above-mentioned study

The decision to completely stop the ENCORE study was taken due to a couple of factors hindering its prospects of achieving the primary goal of evaluating the efficacy of Molgradex on NTM sputum culture conversion to negative.

Firstly, the COVID-19 pandemic affected patient recruitment and resulted in operational disruptions at the clinical site. Also, the approval of the triple-combination CFTR modulator, transformed the standard-of-care for the CF patient population, confounded the ability to evaluate the potential effect of Molgradex in this study.

Preliminary data from 12 of 14 patients enrolled in the study showed that five patients achieved a sputum culture conversion, which means at least three consecutive sputum samples are without growth of NTM.  However, all these patients were taking the triple-combination CFTR modulator. In fact, nine of 14 patients were on the triple-combination CFTR modulator. Though culture conversions were observed in some patients, the company was unable to differentiate which drug was primarily responsible for the benefit.

Notably, Molgradex is also being evaluated in another phase IIa study OPTIMA for treating NTM in non-CF patients. The study was completed in March 2020. Following results from both these studies, Savara will not conduct further development activities on Molgradex for NTM.

Shares of Savara have declined 69.4% so far this year compared with the industry’s decrease of 4.8%. 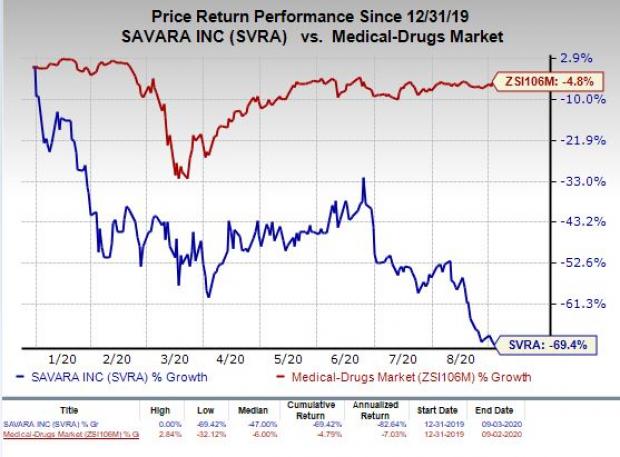 We remind investors that Molgradex is currently being evaluated in a phase III study for the treatment of autoimmune pulmonary alveolar proteinosis (aPAP). This now remains the only indication for which the candidate is being developed now.