Data from these studies showed that vadadustat met the primary and the key secondary efficacy endpoints of non-inferiority to Aranesp in improving the mean hemoglobin level from baseline after treatment for 24 and 36 weeks and the secondary evaluation period (weeks 40 to 52).

However, vadadustat failed to meet the primary safety endpoint of non-inferiority to Aranesp for the first occurrence of major adverse cardiovascular events (MACE), which is the composite of all-cause mortality, non-fatal myocardial infarction and non-fatal stroke in both the PRO2TECT studies.

Shares of Akebia plunged 73.5% following the above development on Thursday. In fact, the stock has declined 58.1% so far this year compared with the industry’s decrease of 4.8% 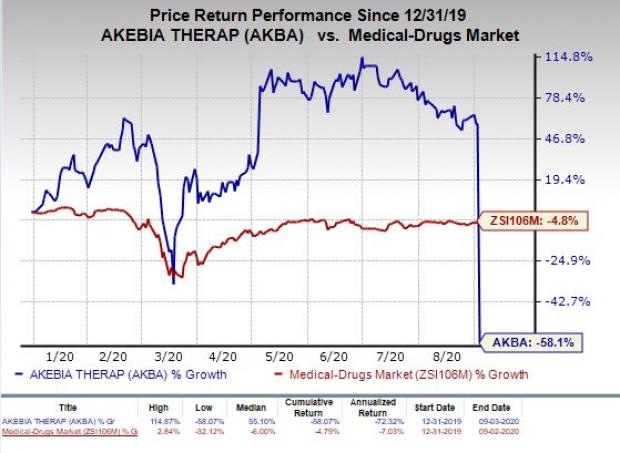 Notably, vadadustat is also being evaluated in two other phase III studies, namely INNO2VATE for the treatment of anemia due to CKD in adult patients who are on dialysis. In May, the company reported positive top-line data from the same.

Per the company, the cardiovascular safety of vadadustat is supported by the totality of the data from both global phase III programs.

Management believes that data from the INNO2VATE and PRO2TECT will support the new drug application (NDA) for vadadustat to address both non-dialysis and dialysis indications. The company expects to file the NDA as early as 2021. However, though the company looks hopeful of getting an approval for vadadustat with regard to patients not on dialysis, supported by the positive top-line results from INNO2VATE on its efficacy and safety, it clearly stated that approval for patients not on dialysis now looks challenging. It is quite possible that the FDA may not approve a drug if it shows any safety concerns.

Meanwhile, the company is working with Otsuka Pharmaceutical to submit a marketing authorization application (MAA) for vadadustat to the European Medicines Agency (EMA).

Last month, Akebia launched vadadustat in Japan as an oral treatment of anemia due to CKD in adult patients, irrespective of whether they are on dialysis or not. The drug is marketed under the brand name Vafseo in Japan.

We note that vadadustat may face competition upon potential approval from the already approved drugs for anemia in CKD patients. Apart from Amgen’s Epogen and Aranesp, J&J’s (JNJ - Free Report) Procrit and Eprex are approved for the given indication. Besides, several other companies are developing candidates with similar mechanism including FibroGen (FGEN - Free Report) and Glaxo.

Why You Should Add CrossAmerica Partners to Your Portfolio Now